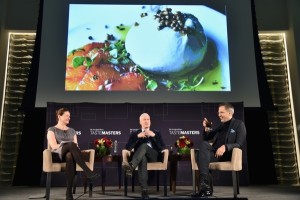 Luxury hotels that go into their shell die in public awareness. As James Lovejoy, of New York-based Brandwatch, said this past week, ‘each brand needs to strike a balance between exclusivity and inclusiveness‘. He was talking, in the International New York Times, about fashion, and presumably he had Hermès in mind. But, says the gal, the statement is equally true when it comes to iconic hotels. Collaboration helps everyone.

Well done, therefore, to Park Hyatt, which has been running arts-meets-food events, coincidentally with the New York Times. The newspaper invites local online subscribers, while the host hotel brings in top loyalty card members. There was an evening December 2nd at Park Hyatt Tokyo, featuring Museum of Contemporary Art Tokyo’s Yuko Hasegaw and Tomorrowland fashion’s Hiroyuki Sasaki, and one at Park Hyatt Paris is now planned for Spring 2016, starring pitting a fashionista Colette’s Sarah Lerfel Andelaman) against a gallerist (Emmanuel Perrotin, both are female). Park Hyatt New York has already hosted its event (see the October 19th, 2015, evening here, on YouTube). It was moderated by Julia Moskin, a native New Yorker who writes for the newspaper‘s Dining section on such diverse subjects as punk-vegan, the best recipes for macaroni and cheese, and is it true that more and more freeze raw fish before making sashimi and sushi?

One of her panellists was Klaus Biesenbach, an out-of-the-box German who founded Berlin‘s Kunst-Werke Institute for Contemporary Art before moving on to his present roles in New York, namely directing MoMA PS1 in Queens and also being Curator-at-Large of the main Museum of Modern Art. But it was the other panellist who really excites, a culinarian with a big big difference. Yotam Ottolenghi graduated from Tel Aviv University in Comparative Literature while moonlighting on the newsdesk of Haaretz newspaper. He planned to do a PhD in London but somehow got diverted to do a six-month Cordon Bleu cooking class and got hooked. Today he runs restaurants: he has a weekly column in a left-wing and unmentionable English newspaper and his four cookery books, two co-authored with his partner Sami Tamimi, have sold some five million copies in all. One of his many BBC documentaries, Jerusalem on a Plate, shows how he believes food can bring Arabs and Jews together (the making and eating of hummus, says Sami Tamimi, who is Arab, makes the pair hope that hummus can bring Jerusalemites together if nothing else will). Park Hyatt is not being superficial in this planned series. This is three-dimensional, and thought-provoking.