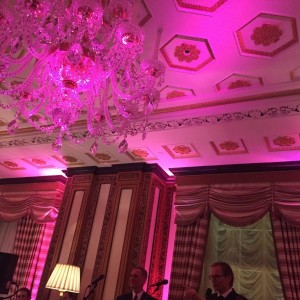 Look up at this ceiling.

When an owner spends an awful lot of money upgrading a luxury hotel it is often a good time to throw a party – and when, as in the case of The Lanesborough London, more than a small fortune has been spent, completely rebuilding everything other than the original outer walls, a really slap-up party is justified. The gal was thrilled and honoured to be among the 400 lucky recipients of gold-edged, formal invitations to the party, this very week, on Wednesday November 25th, 2015. At one point Frank Marrenbach, CEO of the hotel’s management company, Oetker Collection, commented on the sheer beauty. Look up at the ceilings, he said. They were plain. Now some of them are meticulously decorated with gold leaf medallions. 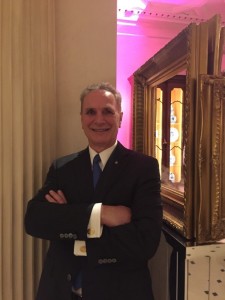 Linda Pinto, who has taken over as head of the design studio of her late brother, Alberto Pinto, was there, and told me that as well as redoing Ciragan Palace Kempinski in Istanbul her team is working on something in Baku. Of course, fans of Geoffrey Gelardi, who actually joined the hotel 18 months prior to its original opening, February 2nd, 1991, were there in force, but it was more than a little difficult to spend any time with him as he was busy making sure, behind the scenes, everything was going like clockwork. A plaque to Alberto Pinto was unveiled. Comtes de Champagne Taittinger flowed and flowed. Some loved the foie gras candy floss. For me, the big hit was tiny open tins of creamy mashed potato liberally topped with Exmoor Caviar, from Siberian sturgeon farmed by Pat Noble and his son. It was oh so good. 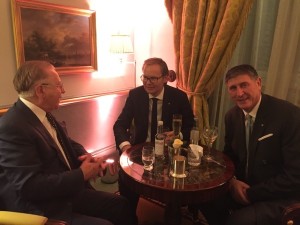 Party planner Mark Lawson Bell of Albion, overseen by Charlotte Aitken, had laid on a few entertainment areas, and there were two live groups, one all male and one all female. Cards invited you to tour the whole ground floor of the hotel and identify which small snippets came from which painting (Grace Leo, who had nipped over from the new Ten Trinity Square Four Seasons Hotel that, on behalf of owner Reignwood, she is overseeing, was busy doing this). The hotel industry was also represented by Corinthia Chairman, Alfred Pisani, and his CEO Simon Naudi – The Queen was dining back in their highlight Malta hotel, Corinthia Palace, as we spoke. The Lanesborough had invited several dozen media, flying them in in style from Brazil, the USA and so on, and self-appointed Mr German Media, Heinz Horrmann, got into serious discussion with Oetker‘s Frank Marrenbach and its COO Didier LeCalvez. 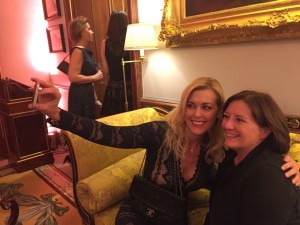 Others were trying the comfortable sofas of this luxury hotel, which were on the main delivery route of tangerine-sized bombes of something delicious and chocolate being carried around, again and again. Tiffany Dowd, the talent of Luxe Tiffany social media and branding support, was taking selfies with Alison Gilmore, Senior Director of ILTM, enjoying her penultimate evening in London before setting off for Cannes to makes sure that all the 3,000+ participants in ILTM Cannes 2015 have a good, and professionally worthwhile, time. And, having had more than a fair share of Exmoor Caviar and Comtes de Champagne, I put my black coat on over my black dress and headed into the black night, to my temporary one-night home.