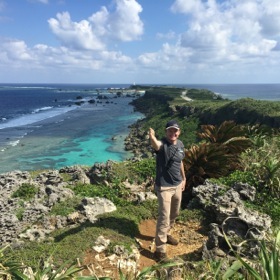 No expedition ship works without a really great expedition leader and none can be better than Moss Hills, Zimbabwe-born, UK-resident, a one-time entertainer who, it seems, can do anything. It is he, on the luxury cruise ship Silver Discoverer, who makes all announcements from the bridge. It is he who is in charge of the ten expedition staff who drive zodiacs, lead tours and overall make sure no-one is left behind in the forest or lost in the translation of what is happening at a complicated cultural site. Today he and several of his colleagues have brought the gal and her many new friends to the Miyako Islands, 290 km south-west of Okinawa’s capital, Naha City. A long promontory on one of the Miyako Island group ends at the Cape Higashihennazaki lighthouse, and, for this moment at least, Mossy (not to be confused with Kate Moss) is seemingly-professional mannequin. 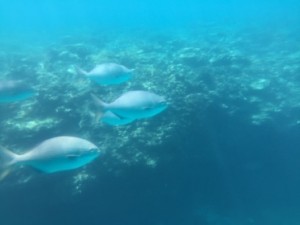 Looking out of the semi-submerged craft

Look at the geology. The cliffs, considerably crumbled many millennia back, are Ryükyü limestone (ancient coral reefs that have been geologically pushed up from deep inside the earth, forming blocks with sandstone and shale). To see what is left of the coral reefs today, we board the semi-submersible vessel Sea-Sky Hakuai, and either go down below, to look out at fish, and a couple of turtles, or stand on the deck, looking over the Caribbean-coloured ocean back to the shore. There, on the skyline, are an extraordinary gathering of five Antalya-type, or Disney, hotels (one is like a Bavarian castle). This is Ueno German cooperation area, named because when the German ship Robinson was wrecked off this shore in 1873 locals managed to rescue eight sailors, and in gratitude Emperor Wilhelm ordered the building of a monument. 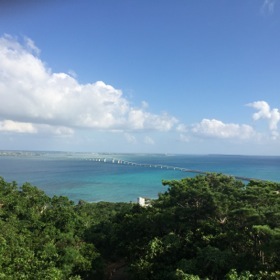 Looking down at Irabu Great Bridge

Shigira Bay country club, also part of the complex, has one of the island’s three 18-hole golf courses. Next we drive over Irabu Great Bridge, opened January 2015 at a cost of the equivalent of £2 billion. It is stupendous, a three-mile-long stretched out camelback of a bridge, with one high ‘hump’ to allow serious shipping under, and a lesser hump for decoration. It is impossible to stop on the bridge, which is only two lanes, but, once over, and on Irabu Island, we drive up to what must be Miyako’s highest point, a little over a hundred feet, to Makiyama Observatory. Climb up and look down to get the full beauty of the bridge. 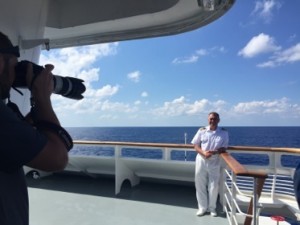 Back on board our temporary home, the luxury floating hotel-at-sea Silver Discoverer, I spot the ship’s photographer snapping the Captain, Alexander Golubev, who I have seen him variously around the ship and at his welcome cocktail, and also actually on the ship’s bridge (anyone can go down, from the seventh deck to the sixth deck, to wander round the open part of the bridge). An experienced ice-master – not much use here where the temperature gets hotter and hotter with every day – he lives in Odessa, and he must appreciate the presence of half a dozen Russian speakers on board, including a Moscow-based movie director.