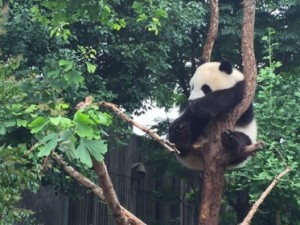 Teenager in a tree

Oh look at me oh, oh look at me oh, aren’t I CUTE? This is one of the teenagers, like about six months old, at Chengdu Research Base of Giant Panda Breeding, just north of Chengdu. Every luxury hotel helps guests plan a visit, the essential tourist thing to do in this lovely city. Ritz-Carlton Chengdu, led by GM Chris Clark, undoubtedly makes it a lifetime memory. The gal was entranced by the visit. Ideally go as soon as possible after the centre’s 8.30am opening as the 100-odd Giant Pandas are at their most active in the morning. After lunch, which is an ongoing, prolonged affair, they snooze. 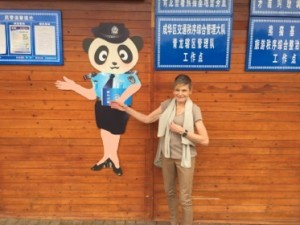 At the panda police station

Even the police station outside the 220-acre ‘panda campus’ is themed. I do recommend wearing comfy walking shoes as there is now no transport once you are in. It is a case of walking, and more walking. There is a museum in there, and you can go through various indoor areas, but in the main it is outside. The landscaping is meticulous and lush (a bit like Singapore’s Botanic Gardens with added pandas). At the main panda viewing areas the crowds are intense, which is definitely another reason for going in early. It also helps to be tall! 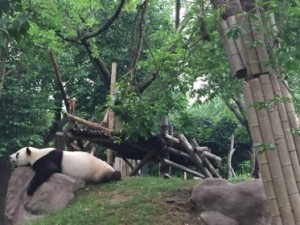 But what helps most is to have the Ritz-Carlton‘s charming concierge Luke, or one of his guest services team, as guide. These people know how to see the most pandas in your allotted time. I loved the way some senior pandas have their own suites, with continuously-supplied room service in the form of six-inch lengths of bamboo, and play areas and snooze areas. A first for Luke was seeing one sitting on a stone, as if a baby’s potty, and expelling what looked like tennis ball-sized blobs of green-yellow ‘foam’, in other words bamboo residue. 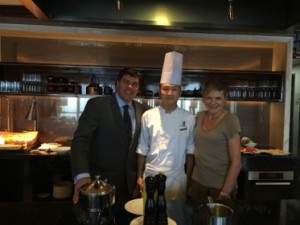 Eduardo Bressane and the Club’s chef

And a first for me, definitely, was not only seeing giant pandas (and some raccoon-like red ones) but getting back to the hotel and being presented with a framed photo of me in front of the pandas! Luke has surreptitiously emailed an image back to the hotel, which had printed, dated and framed it. The lovely manager, Eduardo Bressane, who has just arrived in China from his native Brazil, thought it was a huge joke. We said our goodbyes in the hotel’s superb 24/7 Club lounge, on the 38th floor – do get a Club room, there is a live chef at meal times, and the manager, Lucy Liu, is divine (she was previously in Dubai, at both Atlantis and the Burj). 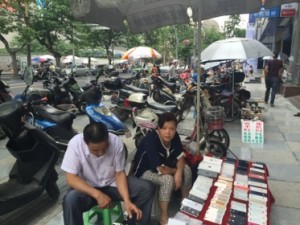 Lucy and Luke are also the key people to advise on shopping around the hotel. Every big brand is here, en masse, and I loved seeing the sellers of iPhones – old, genuine, fake, stolen or what?- outside one of the many Apple stores. Chengdu will, by the way, have one of the three new-look Apple studios, obviously an idea of Apple’s new head of retail, Angela Ahrendts, the former Burberry boss (the other new studios will be in Hong Kong and London). I also found one of the most exciting Zaras anywhere. 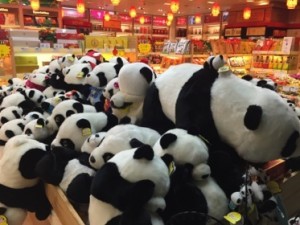 Pandas galore at the airport

Ritz-Carlton Chengdu’s end suite 3719 looked down at Chengdu stadium, where most f the big entertainers perform. It is a high-tech room – every time I go out the drapes close themselves – and in the bathroom I luxuriate in a lemon and white cuddle robe, with Asprey’s toiletries and enough caramel-coloured marble to satisfy an Egyptian pharaoh in afterlife. This is luxury, China style (as is common here in Chengdu, 70 percent of travellers are domestic). This luxury hotel goes all out for Chinese luxury. Locals can invest RMB 23,888 a year for gold card spa membership, which gives lots of benefits, including 15% off treatments – the plebs’ silver card, whoch costs a mere RMB 9,888, only gives ten percent, and you do not get a personal robe. Meanwhile, I was tempted, at the airport, to invest in a souvenir Chengdu panda, but they were all so cute I could not make my mind up.