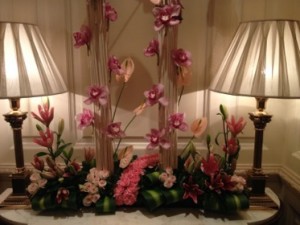 Floral display just inside the door of suite 930

Flowers are more and more becoming differentiators in luxury hotels, and those in the Taj Mahal Delhi seem softer, and more delicate, than before. This is the arrangement just inside the main door of suite 930, an enormous and tastefully decorated Presidential Suite that has a jogger, running machine, in the office. How lovely, thought the gal. One can read about Lutyens while burning calories – unfortunately the three, yes three, pistachio-coloured tomes on Lutyens here on the capacious lined bookshelves are all coffee-table heavies, impossible to move. 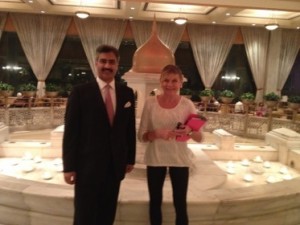 Satyajeet Krishnan, in the hotel lobby

I was dining with the GM, Satyajeet Krishnan, and as we walked down one of two, 35-step, curving staircases from lobby to lower level I noticed how a decorative water feature has been turned into a green-plant mini-garden. We were going down to Varg, the modern-Indian restaurant that gets much acclaim – and not only because designer Theo Nicolaou has incorporated a havali wall as you enter. I had a small tower of tangerine-infused black cod bites, and a plate of duck four-ways – and if they were to market the hot naan with camembert and truffles it would be a best seller. 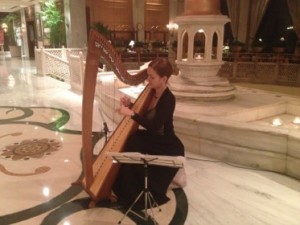 We drank The Wolftrap 2013 from Boekenhoutskloof, Franschhoek, which made me think of a lovely sibling hotel, Taj Cape Town (one of the advantages of ILTMs, always same destination, roughly same time of year, is that they give me the chance always to be in certain places annually). I hear about the Ch Margaux dinner that was held here at the hotel, hosted by the vineyard’s owner, Corinne Mentzelopoulos, who inherited it from her Greek father. As we walk back up the stairs I am introduced to the harpist, new since my last visit. 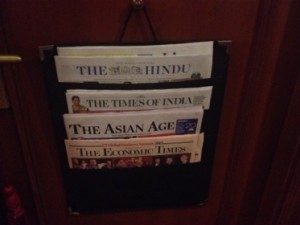 Presentation of today’s newspapers, outside your door

I love luxury hotels which are constantly upgrading themselves. Before, when staying here, I found a plethora of daily newspapers outside my door, and all the others. This time, I had satellited Financial Times and International New York Times in my rack. Taj Mahal Delhi is now hosting Christie’s first-ever Delhi office, and it is working with Delhi Art Fair. This March, there are sessions for the hotel’s Chambers Club members to talk with the Dalai Lama, and during the polo season it hosts in its own marquee at the Indian Polo Association and Army Polo and Riding Club’s Jaipur Polo Ground, ten minutes’ drive from the hotel.