Presenters at the Preferred conference

The presenters at the Preferred Hotel Group two-yearly meeting at Pebble Beach, California, were themselves lots of fun – the gal never knew if they were going to appear in cocktail attire, cuddly bathrobes with bath-towel turbans, or in designer golf gear. They certainly kept the audience wide-eyed, not that the 327 attendees, representing the best collection of over-600 all-size, highest-quality luxury hotels and resorts in the world, were anything but ultra-keen to hear the future, from household names in-the-know.

Speakers were outstanding. Dr Irwin Stelzer, my hero as Sunday Times pundit on the USA (he is Hudson Institute), and Peter Yesawich, Vice Chairman of MMGY Global who knows more about US sociological trends than anyone, the founder of Travelocity, Terry Klein, and the head of Sabre, Tom Klein, and Google’s Stephanie Davis, and more. All predicted that if you do not think outside the operational box when it comes to technology, you are left behind. But think again, urged the one and only Arianna Huffington. Everyone needs time to digitally detox, to step away from devices – she also, by the way, needs a totally darkened room to pursue her main addiction, which is unlimited sleep. 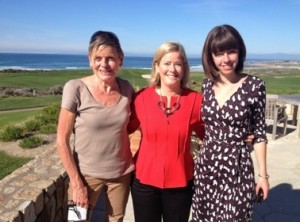 Preferred is owned by the Ueberroth family, John and Gail, and their children Casey and Lindsey. They are all passionate professionals, and everyone working for or with them feels part of an extended family. John Ueberroth is Preferred’s Chairman, Gail is Chief Marketing Officer and Deputy Chairman, Casey is SVP Marketing and Lindsey is President and CEO. They were all there, and so accessible, throughout the entire four-day event. My personal concierge, incidentally, was another fitness fanatic, Caroline Michaud, who was in the gym one day the moment it opened at 5.30 a.m. Later, we lunched outside at Pebble Beach’s Inn at Spanish Bay’s Roy’s.   The opening reception was at Pebble Beach Club, and the following night was at the amazing Monterey Bay Aquarium (later I learned all about its impressive Seafood Watch sustainability initiative, followed by Whole Foods, Compass Catering and such admirable hotels as Belmond Maroma). 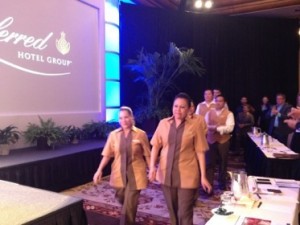 The staff parade, to standing applause

The main Preferred programme of events was held at the 269-room Inn at Spanish Bay, a luxury hotel that truly knows how to accommodate high-level meetings. Every break-out had a different food presentation. Plated sit-anywhere lunches included a memorable sliced beef on salad dish, dressing as you like. The final gala, when they turned round the ballroom in under three hours, had gold and black fabric menus decorated with diamanté, and superlative service to match courses prepared in turn by different departments. Earlier in the day, before the ballroom had metamorphosed, a parade of some of the 470-strong hotel team was greeted with standing applause by the delegates, who know a good job when they see it.

The Pebble Beach complex, on the Monterey Bay coast, was home to the 2014 two-yearly gathering of the Preferred Hotel Group. It also hosts, every January, a major Wine & Food Festival, and in August the annual Grande Concours of classic and vintage cars (during that time, the gal is told, only cars worth $500,000 or above are allowed near the complex’s luxury hotels’ entrances). This November, a 1950-vintage beauty, in shades of raspberry mousse, had come to visit. It went beautifully with the snow-white hair of its driver who, judging by his body language, was probably also its owner.

Year-round, The Inn at Spanish Bay, the Pebble Beach hotel where the Preferred group met, has a sunset piper, just like the six o’clock piping ritual at Turnberry in Scotland, the links-set hotel on which the Inn at Spanish Bay was modelled – yes, The Inn at Spanish Bay similarly has a 72-par links, sandy wasteland, course, designed by Robert Trent Jones Jr, Tom Watson and Sandy Tatum. After he finished his first round, Tom Watson is said to have declared ‘This is so much like Scotland I can almost hear the bagpipes playing’. Ergo, every sunset, a piper emerges from the dunes, coming from the west so impossible to photograph.

It was amusing, anyway, to see so many of the Preferred delegates rising from seats around the many blazing firepits on the hotel’s terrace to take photographs of the piper. This place is certainly nature at its best, by the way. At least three deer consider the entire complex of The Inn at Spanish Bay as their personal territory. Heading back from the gym, in the sports club six minutes’ walk from the main hotel, the animals were on the pavement, and showed no fear. Just as I found in the Galapagos last week, it is as if humans are invisible. I saw them again and again. One day they were on the path right next to where the bagpiper would emerge from the dunes in a few hours’ time.

Oh those dunes! Luxury is a hotel that allows the fitness seeker to get natural, as well as gym, workouts. Obviously the dunes themselves are highly protected but the inn at Spanish Bay has thoughtfully laid a boardwalk down through them to the coastline, where you can run, or hike, for half a mile in each direction. Both ends connect to the public 17-Mile Drive, a road constructed in 1892 by the Pacific Improvement Company, a consortium of railroad barons, to enable pleasure-seekers to drive along the coast between Carmel and Monterey. At either end of today’s boardwalk are parking spots, so locals come and walk the walk, with tiny pooches on leads or kids in wellington boots aching to get down on to the actual beach.

The Inn at Spanish Bay is named for Spanish merchant Sebastian Vizcaino, who discovered Monterey Bay while searching for a safe harbour – he named it for the Conde de Monterey. Today, the area along its 17-Mile Drive is home to such famous residents as Clint Eastwood, Condoleezza Rice and eponymous stockbroker Charles Schwab. These are among those who appreciate looking out at natural beauty: the photo shows the view from the hotel’s room 2518, the gal’s home during the recent Preferred two-yearly meeting (and, to add details, the room, like all the others at the hotel, has a working log-look fire and French windows opening on to a balcony).

As always with such conferences, the Preferred meeting was a unique occasion. People gathered from all over the world, formed a cohesive unit, in this case for three days, and then afterwards left, never again all to meet together, in exact entirety. That is why meetings are so special. Make the most of them while they last. After this one was over, some delegates left on the earliest flights out of Monterey airport, 15 minutes’ drive away. I stayed around for the day, exploring the beach at the foot of the dunes, the far side of the hotel’s links golf course. It was so peaceful down there. The sun, by the way, had shone nonstop since the Preferred group arrived three days ago.

Just as I returned from the beach the infamous Monterey Bay mist rolled in, quickly and decidedly, covering everyone as if in an ambient steam room. There were a few worries about whether the airport would be open. I headed for Roy’s, which so far I had only experienced at breakfast (when servers Marquis and James seemed to know exactly what I wanted, day after day). At lunch I had just ordered a salmon salad when I saw avocado fries as a listed side to another main course. I added a side of them, honestly one of the most gorgeous new tastes for a long time. Try them, tempura-ed avocado strips. Gorgeous and addictive.

Had I felt like it, I could have tried a local cocktail, say a Spanish Bay Bloody Mary, with Absolut Pepper vodka and chilled prawns, or a Pebbletini, Ketel One with blue cheese-stuff olives. Anyway, by post lunch, this luxury hotel had already cleared up after Preferred and was checking in dozens of new arrivals with golf gear. This is non-stop. Impressively, Rod Schinnerer, the long-time Hyatt hotelier who is now GM of this luxury hotel, was standing by the line of arrivals, ready to talk to whomever.