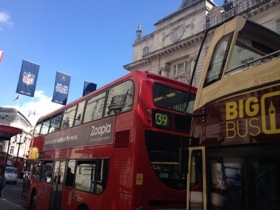 If it is not one thing it is another, as the gal’s grandmother used to say. Quickly following on from ILTM Americas was the intimate ILTM Spa, October 1-2, 2014, at the glorious Café Royal Hotel London – yes, you knew where you were because of the characteristic red London buses, and the tour buses, going up and down Regent Street immediately outside the luxury hotel. It was so appropriate, too, to be somewhere that has a really outstanding Akasha spa and wellness facility, extending three floors below ground. 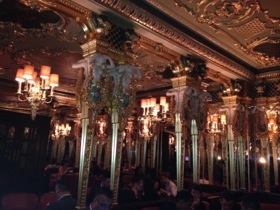 The Oscar Wilde Room, venue for the evening party

Overall assessment at the opening Forum, chaired by Suzanne Duckett, is that wellness is THE word, encompassing spa and keeping fit and eating well. We certainly ate well during the event: the evening party started with Veuve Clicquot and continued on to a served dining experience in the Oscar Wilde Grill, with VC poured freeflow until the last party-goer left. Oh what a room to be in. With its varnished oak floor, and its 1865 frescoes in Louis XVI style, this is where Oscar Wilde fell in love with Lord Alfred Douglas, where Aubrey Beardsley talked endlessly with Whistler – and other habitués have included David Bowie, Mick Jagger, the Beatles and Elizabeth Taylor. 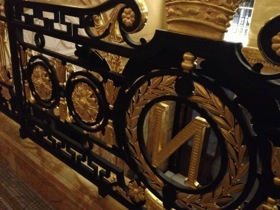 Banisters say N (one way at least), for Napoleon

The hotel is a gallery of history. The more public of the two guest-use staircases (yes, there are also elevators) has wrought-iron and gilded banisters showing big Ns, for Napoleon, sometimes back to front, depending where you are standing. I loved going up and down the stairs, for exercise (and one morning a charming Lithuanian woman came in specially early to open the gym for me half an hour before the stated time). I could also have swum, but no time. I checked out the fascinating Trends Gallery, pinpointing mindful living, awareness of the present: fitness fanaticism; male spa goers; healthy hotels; gene screening for personalised medicine; water works; family spa time; destination spas, and souped-up facials to cope with life (next door, the Relaxation Room had five bean bags to recover momentarily from life…). 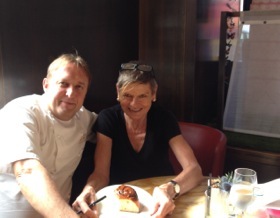 I have known the luxury hotel’s chef, Andrew Turner, for, well, a few years. We met up, now, in the Café, right on Regent Street and so popular day-long with passers-by. One of the specialities is a Piccadilly Bun, a version of the traditional Bath Bun, eight of them baked in a tin together, and pulled apart – Andrew says his Circle Noir absinthe cake is, naturally, selling like hot cakes. With all the restaurants and events places here at Café Royal he typically caters about 2,000 meals a day in all, but that night was the opening of the hotel’s exclusive private members’ club, when at least 700 were expected, for, presumably, more pouring of champagne, with made-at-the moment canapés. It was time to get out of the way!