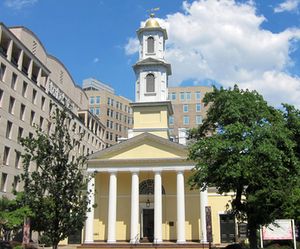 St John’s Lafayette Square is directly across 16th Street from one of Washington DC’s finest luxury hotels, the Hay-Adams. The church is exquisite, says the gal – it is almost fairytale in its design and maintenance. Go to the weekly 10.30am Sunday sung Eucharist and you have a 24-strong choir, a congregation of over 200 and, for everyone, exactly printed details so you can belt out, say, The Church’s One Foundation (words Samuel John Stone 1839-1900, music Aurelia, by Samuel Sebastian Wesley 1818-1876). 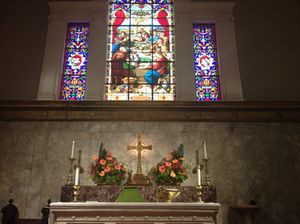 Gorgeous flowers on the altar

Everybody who has taken part in the production today, even the florist and of course the organist, is listed in the printed programme, which also tells you that gluten-free chalice wafers are available and please stay for coffee and cold drinks afterwards, or perhaps take a tour of the church with Rick Busch. I see pew 54, the President’s prerogative. Every President of the USA has worshipped here during his tenure – some of the embroidered kneelers honour those leaders. The church was designed by Benjamin Henry Latrobe, born in Yorkshire, England, in 1764. 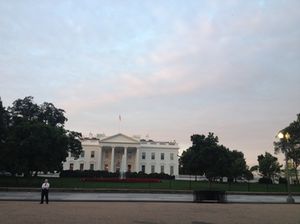 Latrobe died in New Orleans 1820 by which time he had also designed the University of Pennsylvania Medical School in Philadelphia, the central part of the Capitol in Washington DC, and, with Thomas Jefferson, part of the White House). The White House is south, across Lafayette Square, from the Hay-Adams and the best time to see it as close up as you can get is early morning. There is no-one around, apart from odd security. A tent supposedly occupied by protestors is empty. I can actually see the White House from my beautiful room (504) at the Hay-Adams. 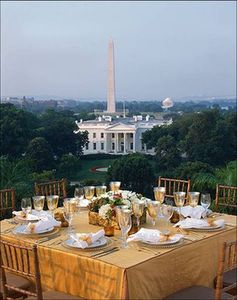 View from the rooftop of the Hay-Adams

A perfect view of it, and the obelisk that is the Washington Monument, is actually from the nine-floor hotel’s rooftop, now partly built in so it can be used year-round. If the weather permits, arrange lunch or dinner up there, with that incredible view. How many other luxury hotels can offer such a backcloth? Perhaps the Grande Bretagne Athens, in front of the Acropolis, and, overlooking Rome, the Cavalieri or The Eden – or, looking far down to Sydney’s Harbour Bridge and Opera House, either the InterContinental or the Shangri-La…. AND, here in DC, the Hay-Adams.