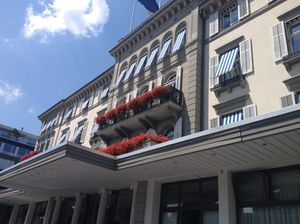 Looking up at the exterior

Some luxury hotels become institutions in their first decade – the gal could come up with a long list, here. There are also some brands that become famous before they even exist (first opening of Paramount, which seems to have been around for ages, is said to be 2017). Other luxury hotels, like Baur au Lac, Zurich, established a niche straightaway and have kept a lead. Little did Viennese baker Johannes Baur, who built this hotel in 1844, know how it would be loved and cosseted during the years. This, says the gal, is still the case: the main lobby is about to have a multi-million update, its first since 1999. 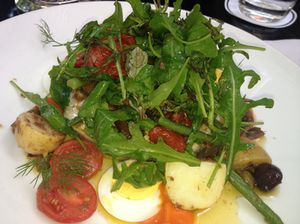 The hardware is kept up to date, and polished and loved, and the food has remained cutting edge, just on the cusp of where food trends are going. When the Rive Gauche casual grill was opened, with such humourous menu items as ‘ebony and ivory scallop carpaccio’, with black and white truffles, some fuddy-duddies must have tut-tutted. Personally I find today’s cuisine, in all the restaurants, absolutely right for the healthy today. See the tuna Niçoise on the outside Terrasse menu. You get a big chunk of tuna, cooked absolutely the way you want, on a bed, and surrounded by, thinnest slices of hard-boiled eggs, slivers of potato, and tomato, and anchovies, and green beans. Perfect for a hot summer’s day. 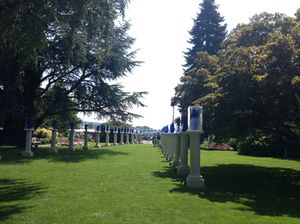 The two columns of Kleins …

And all the while we studied the Yves Klein sculptures, and those examining and photographing them. They are exactly set out, in two rows of 15, with precisely ten feet between each, in curving rows. At the far end by the gate to General Guisan Quai, and Zürichsee, there is ten feet between the rows. These fan out so that the two sculptures closest to the hotel are 46 feet apart. Each sculpture, under glass and on a marble plinth, has four spotlights set in the grass at each corner. I think more about Klein and his vivid mind. He who ‘invented’ this brilliant blue, also divided the universe up with his friends Arman Ferandez, who took earth, and Claude Pascal, who took words, which left Klein with outer space. 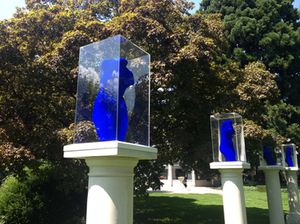 What else did he do? As a Yodan black-belt he published Les Fondements du Judo. As a would-be composer he wrote, in 1949, the Monotone Symphony, a single 20-minute sustained chord followed by a 20-minute silence. From time to time he cast his friends’ torsoes in plaster and painted them blue. He dressed a Knight of the Order of St Sebastian for his January 1962 marriage: in May that year, while watching his movie Mondo Cane at the Cannes Film Festival, he had the first of three heart-attacks – the third, in June 1962, killed him, at the age of 34. His only child was born exactly two months later. OK, rush quickly, to this luxury hotel’s Art in the Park, to see these 30 Kleins before they are taken down August 28th, 2014.