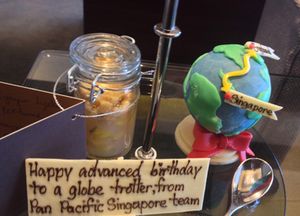 Really, the people running club lounges in Singapore are way higher than global par – and that comment is not only because they are generally high up, in lounges of highrise luxury hotels.  See what the team at the Pacific Club on the 38th floor of Pan Pacific Singapore produced for the gal.  How did they know her birthday was coming up? Elementary, My Dear Watson.  Everyone checking in to a hotel here, as in so many other countries, has to hand over their passport. Ergo, the staff know the date. They also know the age, but thank goodness they did not try to get 20 candles on this cake. 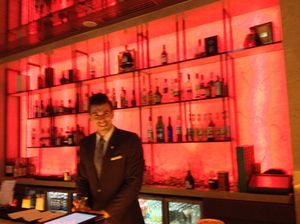 The advanced-birthday presentation came with two books, well chosen, and paperbacks for easy carrying.  I started this particular trip with Hillary Clinton, or at least her hardback auto, ghost-written by a panel of spin doctors and lawyers (did I mention that Heathrow security, having commented on my wacky watch, looked with disdain at that choice of reading?).  Anyway Hillary was handed over to a seemingly grateful recipient and replaced, as my travel companions, by Tracey Chevalier and Donna Tartt. 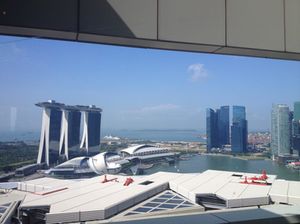 One view from the 360-degree Pacific Club lounge

The people up on the 38th floor Pacific Club, led by a marvellously chic lady, Prema Irangani, have to manage a circular space that you think might take off, like a frisbee destined for Mars, at any time.  You also wonder if it is going to start turning (when the hotel opened back in 1986 it was undoubtedly a restaurant).  This is one of the hotels that the open-atrium-inventor John Portman designed, and probably this thing-on-top was the icing on the cake, so to speak.  Now, with the views from up there, offering 360 degrees in total so you have to decide where you want to sit, you do tend to sit. 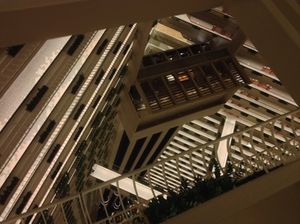 Looking down from the 20th floor

The main body of the 790-room hotel is triangular. Rooms are set facing outwards off the open-sided corridors, which have real flowers in their decorative boxes – at least one of the 650 people who work here must spend all day watering. In days past there were long fabric banners hanging from the 37th floor roof, below the Pacific Club. Now, only the circular holder at roof level remains – a sculpted shape I naughtily say would make a great Cirque du Soleil feature, to hang and swing from it.  Look down, far below, to the tops of decorative conical ‘hats’ that sit not above seven dwarfs but above private seating areas, many with decorative water features around (the hotel describes this as ‘an eclectic collection of seating pods floating over a reflection pool’.  Whatever, it is very calming. 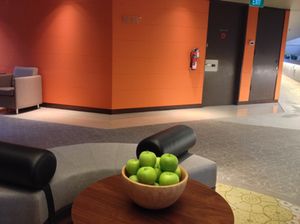 Someone, I suspect the larger than life boss here, Scott Swank, has indeed shown thoughtfulness.  Calm people’s nerves after designer shopping until you can hold no more bags, and then, at peak times, you stand in designated lines for a taxi… Restore a healthy feeling after, perhaps, guzzling hawker food outside somewhere, things like Laksa, Bak Kut The and Nasi Lemak. Back here, pick up one of the bright green apples that are plentiful, both in the gym and also on every floor, by the elevators.  These elevators soar up the outside of the building, by the way, which is great for bird’s-eye pics of the locale. 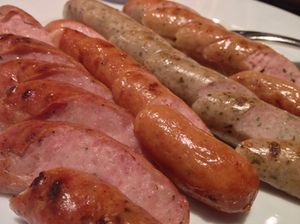 .. and German sausages in The Edge

It makes sense to eat in, breakfast, lunch and dinner.  Yes, the really sensible have chosen a Pacific Club room so they can eat up there, day long, with that magnificent view – and you also get a hefty discount at the hotel’s other, main, restaurants.  I personally love The Edge, a clever concept that does indeed give third floor views, over balconies and corridors, down to the main ground floor below. You are greeted by giant orange billboards and Methusalehs, all Veuve Clicquot (the Champagne that comes with this luxury hotel’s Sunday brunch).  This is the place for seafood on Wednesday and Thursday nights, and, on Saturday, lunch turns into tea with a four-hour eating extravaganza that includes, for strong stomachs, durian desserts.  Me?  I think next time I will go really simple, and order sausages, the German sausages made right here, by a German butcher, and sold in their thousands to Singapore Airlines.  And a glass of bubbly, of course.