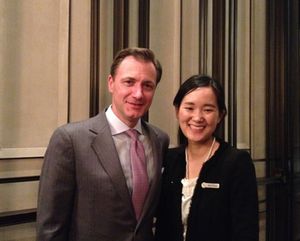 Rainer Stampfer and a colleague await

The boss of the luxury hotel that is Four Seasons Hotel Shanghai at Pudong, Rainer Stampfer, is waiting on the hotel’s second floor as the gal, eschewing the three elevators, bounds up the 55-step marble circular staircase from the lobby. He is with one of his indisputably elegant female team members (well, ANY woman would look instantly even more stylish in a hotel uniform, by Masaru Mineo, mostly Chanel-style suits and all with long strings of pearls). Coco, one feels, would feel at home here. 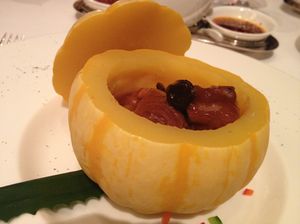 Beef in a pumpkin

Rainer Stampfer loves throwing parties. The other night, he and other Four Seasons hotels held a little gathering for ILTM visitors. He decided to honour the Four Seasons-branded private jet, a 52-seat B-757, managed by Seattle-based TCS (TC Swartz) Expeditions, part of Grand Expeditions. The real plane will take Four Seasons junkies from one hotel to another, circumnavigationally. Here, team members donned flight attendant uniforms – how they must have longed for the Chanel usuals. They handed out boarding passes, and lots of potables and edibles.   Tonight, however, it is a party-for-two, at Shang Xi, the Edward Ng-designed space that has only seven tables in the public area, but dozens in the exclusive PDRs, private dining rooms. This is to prove a fascinating dinner, at what Forbes says is the best Chinese restaurant in any mainland China hotel. 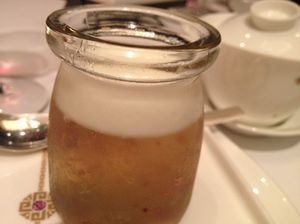 Jelly and yoghurt in a pot

Simon Choi’s menu, 80 percent Cantonese and 20 percent Shanghainese, is carefully explained by restaurant manager Winnie Chu, in the black Chanel. I am surprised how simple the dishes look. We start with steamed eggs, samples of iced green salad, marinated chicken in fragrant soy sauce, roasted river eel bites with pomelo.   Home-style braised prime rib is here served in a baby pumpkin. Dishes come thick and fast. We rush through baked fresh crab in half avocado that looks like a grilled cheeseburger, and sautéed organic cauliflower with garlic, and fried rice noodles with shrimps and vegetables, and finally alight on dessert, in the form of osmanthus jelly topped with chilled yoghurt (yes, dear reader, it is your turn to research what osmanthus is, I am travelling, without connectivity – although of course the hotel’s Audis, Bentleys and Mercedes are WiFi-enabled). 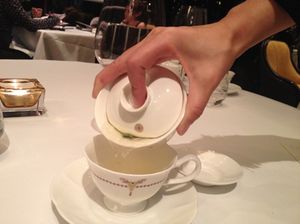 Tea-time, with the Xi Hu Long Jing arriving in the form of what looks like cut grass strips. They are steeped, and poured into cups, different for men (a circular logo on one side) and women (a three-leg logo on one side). Talking of beverages, the hotel sommeliere, sic, is Ying Guo. Her family is in the liquor business and she has won all kinds of awards, including best Chinese sommelier for French wine, and China’s sommeliers’ all-nation champion. I think she is a bit appalled that I want red throughout this meal, rather than Johnnie Walker Blue, or a Camus XO, or at least a Sauvignon Blanc – her choice is, accordingly, Marsennay 2011 Les Longeroies Pinot Noir. 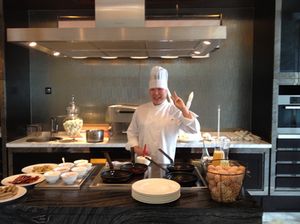 The breakfast cook is ready…

Rainer Stampfer is excited as the little boy he was not very long ago back in Germany. Then, his Austrian mother would talk for hours, he remembers, on food. Tonight he could, were he allowed, deliver a monologue on the Ferraris he is going to be driving tomorrow, round and round Shanghai’s Formula One race track. There is a Ferrari showroom, as well as a Maserati showroom, on the ground floor of the 49-floor silver and glass tower that houses this 200-room hotel – the whole caboosh is partly owned by B.S. Ong, who brought the Singapore Grand Prix to that city-state. I, however, have other plans for the morrow, which include a visit to two breakfasts, in the ground floor inside-out Camellia (yes, the Chanel logo) and the 35th floor club lounge. 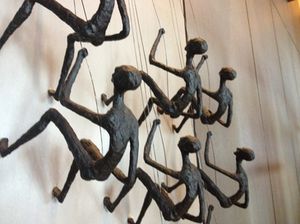 .. and so are the gym’s wall-climbers

Reminded by a Spanish friend, who cannot stop enthusing about the spa, I also have to return to the 41st floor, for the luxury hotel’s wellness offering. The serious-length indoor infinity pool has an LED screen at one end that shows forest or fire scenes. Nearby are two themed showers, one hot-hot Desert Oasis, the other cold-cold Northern Lights, complete with Aurora Borealis ceiling and experiential fog, rain and cold mist. I prefer to head next door, to the 24/7 Technogym, to pay homage, as always, to Taiwanese sculptor Jeffrey Lee’s five inch high metal figures, seemingly climbing up the wall.