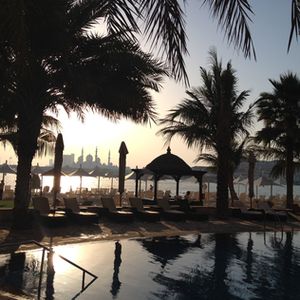 Looking across to the Grand Mosque

Still ‘between the bridges’, at the entrance, as it were, to Abu Dhabi city, the view across to the Grand Mosque is magnificent. The three hotels that have this stupendous view, over the water to the mosque, are, from south to north, The Shangri-La Hotel, Qaryat Al Beri; Traders, and Fairmont Bab Al Bahr (how the gal wishes yet again that the owners of luxury hotels would call them something simple, like Raffles, Savoy or even Barry Sternlicht’s forthcoming 1…). Anyway, here we are, looking across at the Grand Mosque, in all its glory. 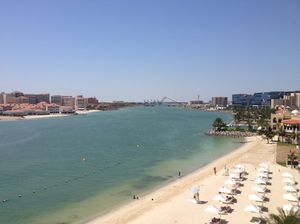 This is a beautiful part of town, between Al Mussafah Bridge, to the south of this water, and Al Maqtaa Bridge, to the north of it. The three hotels sensibly share a water taxi, together with the Ritz-Carlton, on the other side of the water, in Al Maqtaa area. The Shangri-La is tremendously, and understandably, popular. It has marvellous beaches, and outdoor pools and terraces. Particularly at a weekend there is a somewhat incongruous sight of Emirati women, sometimes not only fully veiled in black but with shiny nose-guards as well. Their little kids are in normal global-kids-swimwear. These elegant women walk slowly, because of the heat. Right next to them, flopped out in minimal swimwear, are female tourists from all over. No-one seems to mind; the UAE is so relaxed. 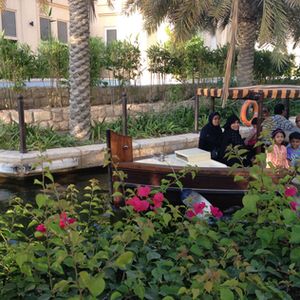 Family outing on the hotel’s canal

Shangri-La has a divine length of inner canal and I climb up over a wooden bridge, 16 steps up and 16 steps down again, to get to the gym, which is in a separate wellness building – no, give me the mixed gym, please, I do not want the ladies-only. As I walk alongside the canal one of its silent boats passes, with locals enjoying the peaceful ride. Everyone is very courteous and charming. Later, at the highly popular buffet restaurant, people do not jostle or push in front of each other. 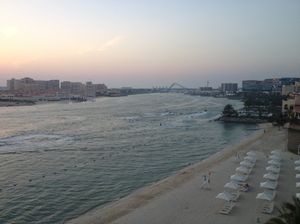 As the afternoon lengthens, jet-skis ruin the calm

This hotel has nearly half of its guests as repeats, coming back again and again. Thursday through to Saturday. Why? As the afternoon passes the calm of the area ‘between the bridges’ becomes a nightmare for anyone who cares about peace and nature. First one and then another and then dozens of jet-skis appear. Young men who should know better create mayhem, showing off as they zigzag and swirl in and out, trying to out-manoeuvre their friends.   I sincerely hope that Reem al Mahri, whose responsibility this appears to be, takes action before tour operators, travel agents and individuals start diverting holidays elsewhere (Ms al Mahri is Acting Head of Hospitality and Attractions, Tourism Ecosystem and Leisure Department, Abu Dhabi Tourism and Culture Authority). 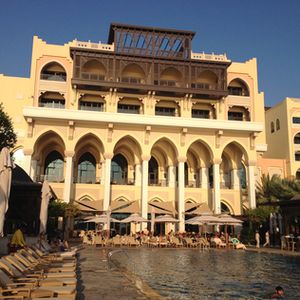 Looking back up at the hotel, from one of the pools

Back to the hotel. this lovely fort-like structure, right on the beach, that has over a thousand passionate people looking after a mere 214 bedrooms. The boss of it all, Arbind Shrestha, a Nepalese whom I have had the honour of knowing and talking about walking with, though never doing, for at least a decade, believes in emotional attachment as the key to customer service. Take just one example. Walking down to our buffet dinner, we pass an authorized hawker, his wares set out on the stairs. Any happy customer who bought one of his gorgeous coloured bangles or rings would always recall where it came from, and thus remember the hotel. 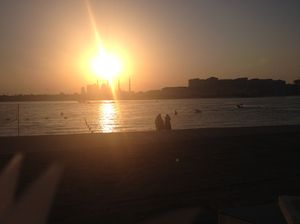 Looking out, at sunset

I also remember sunset here, looking across the water to the Grand Mosque – Sheikh Zayed Grand Mosque, to give it is full name (what did I say about lengthy names?). This is another memory of this luxury hotel.