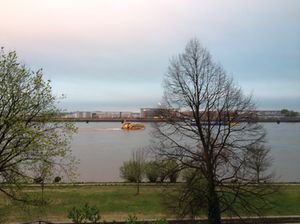 Looking across the Elbe from Elbchaussee

The Elbe River rises in the Krkonoše Mountains of the northern Czech Republic before crossing much of Bohemia, then Germany and, 1,091 kms later flowing into the North Sea at Cuxhaven, 110 km northwest of Hamburg. Sail down its full length and you have passed Dresden – the gal cannot wait to return there, to see the Historisches Grunes Gewölbe and the Sixtinische Madonna 1512-1513, by the artist Raffaello Sanzio da Urbino, better known simply as Raphael.  But there is so much reason for being down by the mouth of the Elbe, in Hamburg.  Look across the Elbe, from the exclusive Othmarschen residential area, and you see, a mile away across the water to the south, the headquarters of Airbus Deutschland. 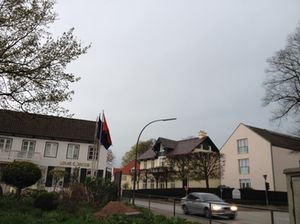 Hotel Louis C. Jacob is both sides of Elbchaussee

Elbchaussee, the street, runs parallel along the north shore of the Elbe river, but 100 stone steps above it.  There you find one of Europe’s most intriguing hotels, the Louis C. Jacob, formed of several old, and some new, buildings on both sides of the road (there is an underground walkway). Back in 1790, when this was Denmark, a confectioner called Paridom Burmest was making sweets here, but somehow he caught fire. His widow Elisabeth quickly caught the eye of a Parisian gardener fleeing revolutionary troubles back home.  They married, he changed his name from Louis Jacques to Louis Jacob, and they started a restaurant, with a terrace of lime trees that Louis J planted. 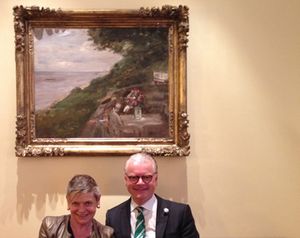 GM Jost Deitmar in front of a Max Liebermann original

At least one of the pollarded limes that are still a feature of what is now an 85-room Leading hotel dates back to that time.   In the early 20th century one of Germany’s most famous artists, Max Liebermann, 1847-1935, came to Hamburg, and painted the lime terrace – the hotel, now owned by Horst Rahe and family, has two original Liebermanns. Horst Rahe enticed Jost Deitmar, a luxury specialist, to come and run this hotel, which attracts top financial CEOs, Airbus and airline executives from across the river, and affluent German away-nighters who simply adore sitting by big windows and looking out at the activity on the river. 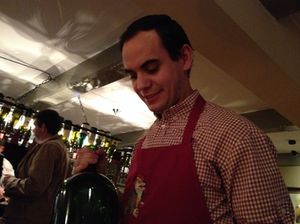 Let me offer you a glass of ‘my’ wine, said the waiter

They also come for the Michelin two-star Jacobs Restaurant, which was closed when I was there.  In a way I was so pleased, because I ate, instead, across the road at Kleines Jacob, a Hanseatic brasserie that was chock-full of locals, as it is every night. The manager spends half his time hand-slicing coldcuts, there is a busy glass-fronted open kitchen, and the whole thing is really fun.  A waiter in a red gingham shirt immediately descended, would I like a glass from ‘his’ open wine (always an Imperial, tonight Mathias Gaul Cabernet Sauvignon and Merlot)? I would, it was great.  This is a fabulous place, the theatre of country fare and service with the music of happy conversation, at white-noise level. 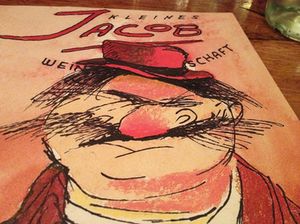 The menu cover sets the tone

The menu cover, by Werner Zganiaz, in 1980, gives a hint, smile and relax.  After ordering, by the light of a four-inch wide overflow candle, I dipped slices of country bread in olive oil.   I went for best-sellers, a plate of fir-smoked potatoes with a china pot of cottage cheese and marjoram (many around me had platters of cold-cuts, sliced by the above-mentioned manager who must have more muscles in one arm than the other).  I went on to what they call a flamenkuchen, which is a rectangular pizza-for-one, on a wooden board.  Mine was topped with goat cheese and rocket. 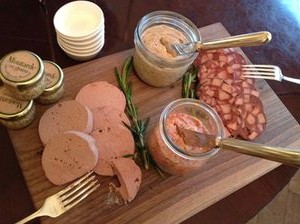 Cold cuts for a German breakfast

Hamburg is increasingly being viewed as the Riviera of Scandinavia – Danes, Norwegians and Swedes love coming here, especially in summer.  I can see why they love it at Louis C. Jacob.  Sit out on the lime terrace, watch the ships plying the Elbe, and cycle for hours, or jog or run, down along the towpath.  And, of course, join Hamburgers in tasting tonight’s six-litre open-bottle (an Imperial). In the morning, do not under any circumstances miss out on this luxury hotel’s superb breakfast buffet, in an elegant room, looking out through high-high windows, across the Elbe.  What with crispest linens and a splendid array of fruits and the breads that you expect at the best of Germany – plus nutella and an amazing array of cold cuts – and a stack of today’s newspapers neatly rolled in a trunk in the lobby as you go in to breakfast, you are all set to start the day.