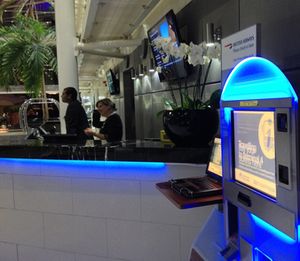 At an airport, especially before a flight, location and simplicity of living honestly take precedence over the usual criteria for luxury hotels, says the gal. London Heathrow Hilton is connected to the airport’s Terminal Four, by an airbridge – just long enough for a 12-minute hike if you cannot get exercise any other way. The hotel is led by a brilliant boss, Jurgen Sutherland.  He and his team think of everything.  See the photo, with its bus ticket machine to far right (buy a ticket for the half-hourly shuttle to Terminal Five). Just the other side of that machine is the British Airways boarding card laptop, with printer. Check yourself in, print out your boarding card. 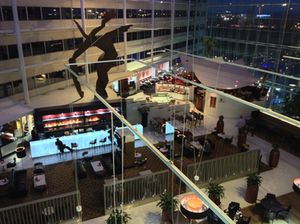 And looking down into the lobby

My other top-two airport hotels, also connected to terminals, are the Copenhagen Airport Hilton, reached by a two-minute air bridge, and, at Vancouver Airport, the Fairmont that is actually right above the terminal. When the London Heathrow Hilton opened, in 1990, the lobby was itself likened to an airport terminal.  Look at that soaring space, what is it all about?  It is a five-floor glass trapezoid.  Enter the narrowest side, to the roof-high lobby, and look far ahead to the wider end, which has a pool and conference rooms on the floor below.  Both side-sides, so to speak, are bedrooms, half facing in, to the atrium, and half facing out (the North-facing ones look to the terminal).  There are full-size palm trees, and a couple of gigantic deliberately-rusted silhouette sculptures. 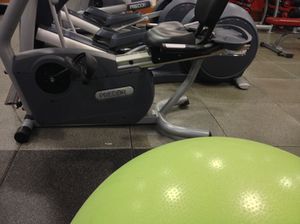 Down by the pool is another requisite of the good airport hotel, namely a 24-hour gym. Bedrooms, as you will assume, have alarm clocks so you can wake yourself up in time for a workout before that horribly-early flight..  The gym has copies of decent newspapers, and apples, and then I personally get more exercise by walking up the fire stairs rather than taking an elevator. I like the new bedrooms, by the way, with rounded-edges cabinets for tea, coffee, and a glass-front minibar, empty so you can put your own things in. 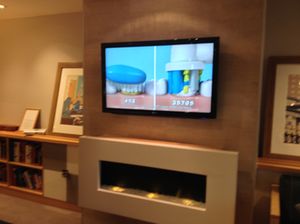 .. and a Club lounge, with working fire and library, helps

Regulars know that it is definitely worth staying here, too, for the Club Lounge, which opens at 6.30am. It has a plausible fire and, a really nice touch, an excellent selection of books in a library that is filled up by the many American guests who seem to read hardbacks when travelling (no Brit would ever buy David Baldacci’s King and Maxwell in hard cover, but it was jolly nice to be able borrow it overnight).  There is a big communal table in the lounge but somehow people here us it only as a last resort – they prefer working their devices at tables-for-two.  Talking of devices, you have all electric sockets, for US, UK and European plugs, handy above bedroom desks. 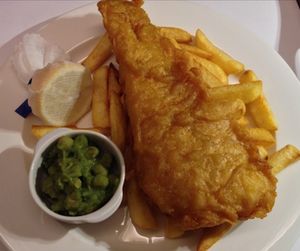 I have had the fish and chips here many times, in the club lounge, in the restaurant and in my room. On this visit, I was watching a fascinating television programme on poets and World War I, so dining in was the best choice. A cheery young man brought the tray, and although our Chilean winemaking friends might have had a fit, a glass of Concha y Toro Casillero del Diablo goes just perfectly with the English favourite (OK, so only a couple of months ago I was claiming that New Zealand is the home of fish and chips, but there are other contenders; the more the merrier). 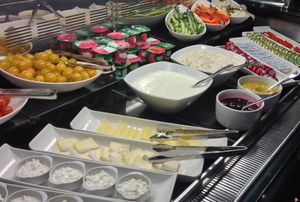 .. and a great buffet breakfast

For all you serious travellers, make a note that the first bus from this airport-luxury hotel to Terminal Five leaves at 4.50 am. On this occasion I was not quite that early. There is a 24/7 coffee bar, with Costa Coffee, but I was just able to make the full breakfast buffet, which starts at 6.30 (there is continental-only from six). Great buffet, stacks of today’s Financial Times and Wall Street Journals. What more does the busy international traveller want?