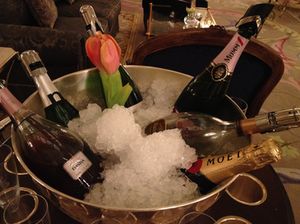 The Champagnes are on ice…

There is not nearly enough glamour in life generally these days, and many so-called ‘luxury hotels’ believe that a Lasvit or Murano chandelier or two satisfies the glamour stakes.  Not true, says the gal.  If you want to find glamour, head to Halekulani on Oahu or, if it is more convenient, to the centre of Madrid, to the marvellous and eternally young Hotel Ritz. (Just as with Joan Collins, 80, and model Daphne Selfe, 86, and even Jerry Hall, a youthful 57, glamour seems to go with anything that hints of a bygone age but at the same time is bang up to the minute – they too, surely, would love the elegant Champagne bowl in the hotel’s lobby lounge.) 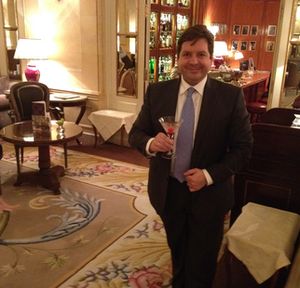 ..but Christian Tavelli holds a DalíTini

As it happened I arrived at Hotel Ritz the very day that its part-owner, and management company, Orient-Express changed its name to Belmond, as if in honour of a town in Iowa.  I was greeted at the door by GM Christian Tavelli who combines the best of his Italian heritage and his Argentinian birthplace to exude arguably the most glamour in guest-greeting. He never just walks with you.  He takes your arm.  You feel seven feet tall.  He showed off his brand-new 3,500 sq ft carpet, in the photo here (it was hand made in La Alpujarreña, Granada, and the old one was auctioned off March 4th, 2014 for 12,500 euros).  He showed off the hotel’s special DalíTini. 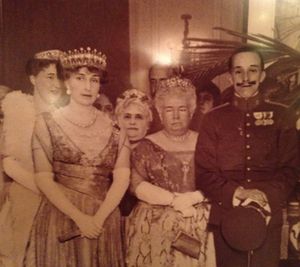 The DalíTini is named because, according to the surrealist’s autobiography The Secret Life of Salvador Dali, he tasted his first-ever cocktail here in 1926, at the hotel’s Velasquez bar (after having his hair cut at the salon, he saw an elegant lady having a cocktail, ordered one too). Apparently he pricked his finger, some blood got into the drink and he pulled a cherry off the senorita’s hat to cover his mishap. Today the drink is made with Picota del Jerte cherries from the Jerte Valley, plus vodka, Cointreau and Martini bianco.  Dali is subject of one of the 43 black and white photos hanging on the bar’s panelled walls. One of the most hilarious shows King Alfonso XIII 1886-1941 with friends and his family, including his wife, Victoria Eugenie, grand-daughter of Queen Victoria: born at Balmoral, she was brought up in the Royal Family and caught Alfonso’s eye at a dinner party – after six children, including two boys born with Europe’s Royal Families’ curse, haemophilia, Alfonso and his queen separated (her grandson is current King of Spain). Is that the widowed queen mother in between? 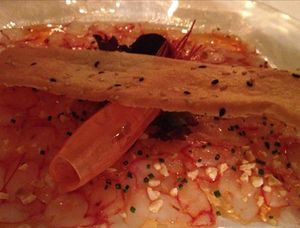 It was Alfonso XIII who had been so impressed with The Ritz London, finished 1906, that he asked that hotel’s architect, Charles Mewès, to build one here, too. Who, one wonders, is the staid pudding in the middle?  The brilliant Christian Tavelli is producing a booklet so that bar-goers can identify who is who. There are many brilliant things about this 167-room, 104-year old hotel. Take chef Jorge Gonzalez’s menu in El Restaurant Goya, which features such signature dishes as this red San Lucar shrimp carpaccio with rose oil.  After a glass of Laurent-Perrier from the Champagne bowl, the sommelier, one of a team led by Gemma Vela, suggested a Las Retamas del Regajal 2012, from a mere 35 miles from Madrid. We ate off exquisite floral-edged porcelain, made for the hotel in Thailand. We drank from reed-stemmed glasses engraved with the hotel’s logo, incorporating Madrid’s sign, a bear climbing a madroño tree. Glamorous. We finished a multi-course meal with a little tower of violet cream (the only person who would not have swooned over this dessert is self-appointed globalist Tyler Brûlé, who hates anything purple). 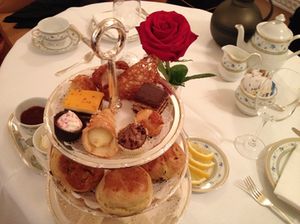 Actually the bedrooms are so luscious you want to spend all your time there. Dream of gold, orange, rust and tomato satins and damasks and bespoke carpets, and beds with half-testers and flowing swathes on the wall behind your head, and bathrooms with gold taps and heated towel rails. Order afternoon tea and it arrives, as shown, with enormous bowls of clotted cream and kitchen-made berry jam.  My room service ‘fitness breakfast’ was another triumph, with set items of fresh juice (carafe in a silver holder, and a logo-engraved glass), bran cereal, low-fat yoghurt, low-calorie jams, still-warm wholemeal petits pains, a bottle of beautifully-green olive oil and arguably the world’s best egg white omelette under a shiny silver cloche. 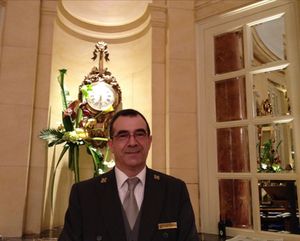 A concierge is there to see me off, at 7a.m.

Even the gym oozes glamour. An interior room with pale wood walls, its lighting is soft apricot, and there is a tub of dried flowers on the floor. The vitrines, with displays of Le Cinq Mondes products, invites you to visit the adjacent spa but no, it was time, still before the light was up, to leave this ultra luxury hotel. The night concierge had been a bit aghast when I went out running, an hour before (well, only up adjacent Antonio Maura to the gate to Parque del Retiro, a five-minute jog while night security opened up the gym for me). When I came down later, the Porsche Rimowa ready as always, the concierge escorted me to the car.  No, he did not take my arm, but he smiled in the Ritz Madrid way.