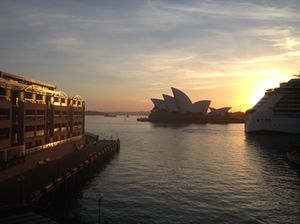 Oh what a wake up for the gal, here in Sydney (no, it is not the capital of Australia, one tends to forget about poor old Canberra…). This is the 6am view from room 239 of Park Hyatt Sydney, the luxury hotel that achieves at least A$100 margin over any other room rate in the whole of the country.  It will be interesting to see what happens at Hayman Island once it re-opens as One&Only sometime in the first half of 2014, though it will not be able to offer a view like this one. Already, at this early hour, there are runners along the boardwalk that wiggles its way around the hotel’s exterior, and on to Circular Quay to the right of the picture, or round to the left to Dawson Point. 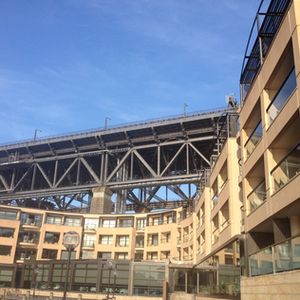 From the boardwalk, look up at the hotel, and the bridge behind

I look the left route, round Dawson Point and along Hickson Road, skirting past four old wharfs that are now fully developed as highly desirable residences and offices.  I was trying to find where Silver Shadow, the ship I am boarding later today, is tied up.  I expected the luxury cruise ship to be at the main cruise terminal in Sydney inner harbour but that spot seems to be perennially taken by a succession of Royal Caribbean’s monstrosities.  Never mind, you can hardly see them from the Park Hyatt, the unique hotel that, like the boardwalk it flanks, wiggles its way around Dawson Point Park.  Now with four floors, all its rooms face over the water. Above it soars the huge Harbour Bridge.  It is a once and can-never-be repeated hotel, with a stunning rooftop pool, a Kerstin Florian spa and a 24-hour Technogym-with-a-view. 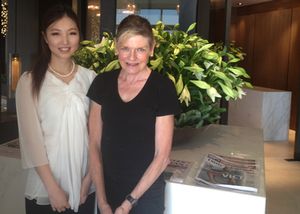 It has so many unique features.  Where else do you find all the females working here wearing pearls?  I passed someone on a corridor whom I thought was a maid and she was not wearing pearls. I was just about to ask ‘where are your pearls?’ when I realized this – guest, as it turned out – person was not nearly as chicly dressed as the staff. The room maids here wear stunning taupe overshirts and black trousers, and pearls.  One of the front desk women’s pearls are not the norm.  They were her great-aunt’s, she explains.  Jenni, at breakfast, looks more stylish than anyone on a Milan or Paris catwalk (I do not even count the London or New York shows when it comes to style).  Yes, her off-white overshirt is uniform. I want a job here. 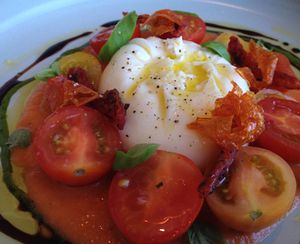 The Dining Room follows the wiggly shape of the hotel and all its water-facing walls are glass, for stupendous views. Lunch is the venue for Sydney’s Ladies Who… by the dozen.  They love it, come in gaggles and exchange all the gossip. The only top women not here today appear to be former Prime Minister Julia Gillard, presumably hatching some political plan, and Australia’s richest, Gina Rinehart, who appears to be able to control her mines but not her family.  Sydney-siders also flock here, I am told, for afternoon tea, up to 160 of them a day, and they eat every delicate morsel, sometimes with rosé Moët.  I would be here every day for the caprese, an absolute picture and OH the taste, of the local bur rata and the various baby tomatoes. Many come on Fridays, too, for live jazz. 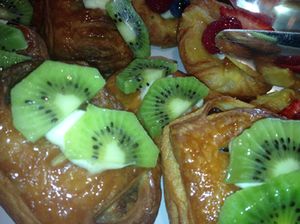 Breakfast is another colourful occasion.  You go into a buffet area, help yourself to fruits and yoghurts from glass-front chilled cabinets, or to other items cleverly protected by open-front lucite boxes.  The Danish look sensational, but I will leave them forever (it reminds me that Denmark’s Prime Minister is certainly the world’s best-looking at the moment, as everyone knows since she took a photo of herself with Mr Obama and his side-kick D. Cameron, at the Mandela memorial). Breakfast here has one of the world’s best coffees, by the way.  A simple black coffee comes as a long black, made by adding a double espresso to boiling water, using local Vittoria coffee. 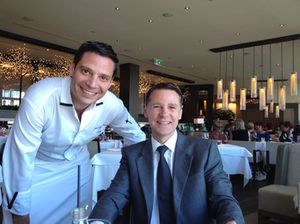 This luxury hotel reopened February 2012 after a thorough overhaul masterminded by GM Andrew Mensforth (is he the only hotel manager who commutes to work by running, carrying his smartphone strapped to his upper arm?).  It was he who put the pearls in place.  He has also recently put a fabulous executive chef in place, the photogenic Franck Detrait, who was previously cooking at Park Hyatt Dubai, and Park Hyatt Paris-Vendôme. Two genius creators together.