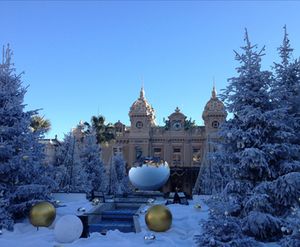 Looking through a Christmas landscape to the casino

For a city-state of a mere 37,579, at last count, Monaco might not seem to justify its glorious luxury hotels and other trappings, but it has a per-capita GDP of $163,025.  Where does the money come from?  Only the French or US citizens who live here have to pay national taxes back home, everyone else avoids that inconvenience.  Monaco has no income tax, and low business taxes.  Ah, it has a casino, says the gal, although at this time of year the building looks more like a fake backcloth for the absolutely splendid Christmas decorations in Place du Casino.  The casino, and Monte Carlo, came about only because of the persistence of a woman, Princess Caroline Grimaldi. She thought it would save the family from bankruptcy. 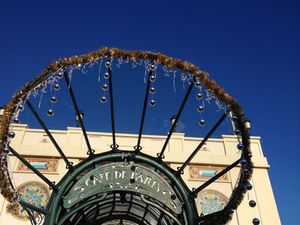 Somehow the operator of the Bad Homburg casino in Germany, François Blanc, agreed to relocate to Monaco and from 1863 on, when Société de Bains de Mer SBM was formed, that company has always owned and run the casino, and much else besides.  Its hotel division has the Hermitage and Hôtel de Paris, and Monte-Carlo Bay Hotel and Monte-Carlo Beach Club, and it manages Le Méridien Monte-Carlo as a franchise. Its numerous restaurants include the Art Deco Café de Paris, to the east side of Place du Casino.  And then there is the casino itself, partly designed by Garnier, with shows, and restaurants, and of course those tables.  The casino is now probably Monaco’s trademark logo around the world. 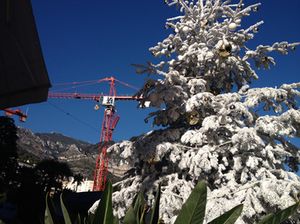 SBM also has a really unattractive, almost WWII-type building just to the north of Hôtel de Paris, separated merely by avenue des Beaux-Arts.  This is one of the two sports halls, Sporting d’Hiver, which serves as SBM headquarters.  Thank goodness this will be razed in 2014 and a new, we must hope better-looking, building will replace it.  Now cranes are still finding spots to sit, and construct new buildings, even in this high-density city-state. In among the artificial-snow Christmas trees they look utterly incongruous, but Monte Carlo as a whole is what Las Vegas would like to be, but cannot achieve the sophistication that goes with show, here. 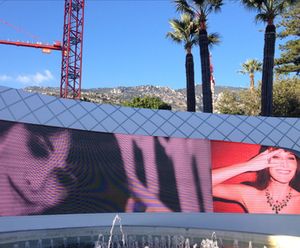 .. as a video billboard starring Carla announces a Bulgari pop-up

What is Carla Bruni doing on a giant illuminated billboard facing the casino?  OK she played a live concert here on December 6th, 2013, but that is not the reason for her 24/7 publicity.  No, she is the face of Bulgari and that company happens to be one of the top brands being displaced from ground floor boutiques in Sporting d’Hiver, while that building is replaced. In 2014, a pop-up super-brands shopping village will open immediately north of the casino, flanked on both sides by Allée des Boulingrins (the pop-ups are being designed by architect Richard Martinet, who interestingly is also doing the rebuild of what will be Hôtel de Crillon Rosewood Paris).  Judging by maquettes showing what they will look like, they remind me instantly of white Hobbit houses. Enter Frigo and buy your colourful Bulgari, as worn by Madame Sarkozy.. 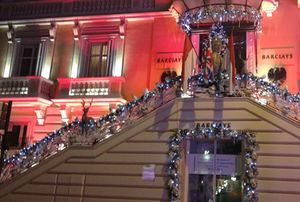 There is a lot of colour around in Monte Carlo. Mature locals, always immaculately groomed, might well wear soft pink, Nantucket-style trousers, with navy blazers, and that is the guys. The table set at YOSHI in Hotel Metropole has dayglo green place mats, and green ribbon-tied white napkins, and purple orchids. Breakfast at Fairmont Monte Carlo’s Saphir and you face day-glo blue lights behind the buffet. At Hotel Hermitage, all the lovely personnel wear soft orange neck ties or scarves, just for this season. Go outside, and even boring banks ooze colour, here in Monte Carlo. 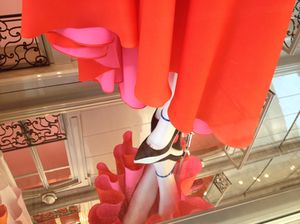 .. but the fashion prize goes to this Dior frock

Honestly, my favourite of all the shops I saw as I ran round town was Dior, simply for this stunning dress, with its pink lining.  This would make the ideal cocktail dress for staff in any top luxury hotel… who will get in first?