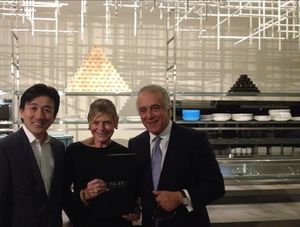 Well what a surprise, the parties go on and on, but it is necessary to move east from Cannes and out of France (though you would hardly know it) to the Principality of Monaco.  There, on Monday night – December 9th, 2013 – the one and only Nobu Matsuhisa opened his first restaurant in western Europe, or at least on the mainland.  He has one in Budapest, at the Corvinus Kempinski, and two in London, one of them in another luxury hotel, the Metropolitan. Now he is at Fairmont Monte Carlo, and the gal was there just before him, to see what Fairmont, and Ian Livingstone, the owner of this 616-room hotel, have done. 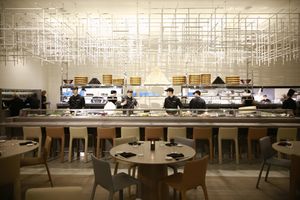 The kitchen, now ready to work

Nobu’s corporate director, Hiro Tahara, and the hotel’s creative director and GM Xavier Rugeroni, showed off the area, and the stunning kitchen.  It is designed by Martin Hulbert, long-time business partner of Mary Fox Linton (many others will remember what they did at One Aldwych in London, and then at The Grove stately-home hotel, and what Martin Hulbert then did equally brilliantly at The Dorchester Collection’s Coworth Park near Windsor).  Here he has gone for minimalism of colour and trappings.  I love the way the plain smooth wood seems to sing a song. I love the way you look one way, at the kitchen. 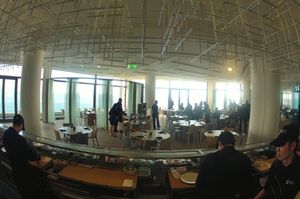 Looking from the kitchen, through to the Mediterranean

And you look another way, out to sea.  You wonder if you are in a 240-person private yacht, for you are literally cantilevered out over the Mediterranean, here at Nobu in Fairmont Monte Carlo. Curtains can be drawn around some areas and, says Xavier Rugeroni, they will never accept any booking for more than 32 to avoid the entire place becoming one large noise box.  You know that everyone in town and beyond is going to want to come and eat here. There may be only 36,000 Monegasques living here but there are thousands of others, lots of them gourmets, already spoilt for choice with Alain Ducasse at Hôtel de Paris and Joël Robuchon offering both French and Japanese in his Metropole restaurants. 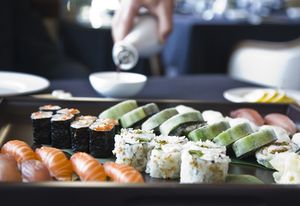 I, and a couple of hundred others, had a taste of the divine Nobu food at Fairmont’s ILTM party, at Château de la Napoule last week.  Exquisite little plates were passed around, bite-sizes but not your usual canapés by any means.  It was the kind of nightmare-for-dishwashers food, in that if every guest took ten little bowls and dishes, with utensils, that meant 20 items per person, multiply that by 200 and it all had to be transported by the hotel to the Château, west of Cannes, and back again. Not to worry, the hotel is used to it.  It catered the 6,000 guests at Prince Albert’s wedding, when Xavier Rugeroni flew in (or up?) chefs from Fairmont’s African properties in honour of Princess Charlene’s heritage. 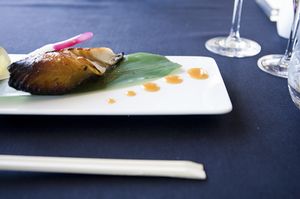 One of my favourite Nobu dishes of all time, which I have eaten in New York with Drew Nieporent, in London with friends, in Hong Kong with friends, is his black miso cod.  It is a signature.  As I taste it yet again I think to myself that he is probably Fairmont’s second ‘celebrity chef’. The group has so many really talented hotel chefs, but it is only here, and in Abu Dhabi, that it works with big global names (in Abu Dhabi the culinary partner is Marco Pierre White).  Mostly I run away from Celebrity Chefs as fast as I do from ‘award-winning chefs’ but there are exceptions, and these are two. 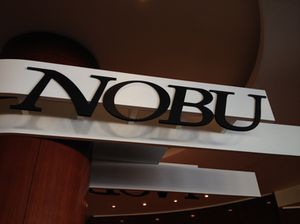 Nobu is, well, clearly signed off the lobby!

Xavier Rugeroni is pretty smart.  His hotel is on the Grand Prix circuit and of course all his rooms are taken. He turns a ballroom into a Billionaires’ Club, a pop-up space created by a billionaire himself, Flavio Briatore. Now all those at this luxury hotel during Formula One time have even more to enjoy, namely the race, the Club and Nobu, which will be running on three seatings a night, the last one at 12.30 am (‘you can still go on to the Billionaires’ Club, says Xavier Rugeroni, with a smile).  Make your reservations for Sunday May 25th, 2014, the final race night, now.