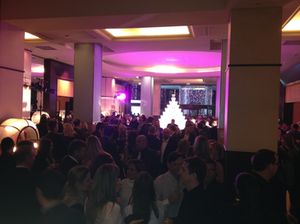 The night before, at the ILTM party

Grand Hyatt Cannes – Le Martinez sure knows how to throw great parties.  The gal has never been to a Cannes Film Festival party but it cannot be any more memorable than the annual ILTM cocktail, when the lobby of the luxury hotel was central point for just under three thousand ILTM exhibitors and buyers trying to meet up with friends (deafened by the noise, the gal gave up and left them all to it – who would miss one person in all that melée?  The Champagne, by the way, is still Taittinger, just as it was when the Taittinger family owned the hotel, and the toiletries in the 409 bathrooms are still Annick Goutal, owned by the Taittingers for a long time. 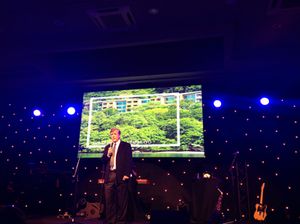 Tonight, John Wallis take the state at the start of Gala Dinner of the Stars

The following night, the Martinez threw a very different party, a seated Gala Dinner with the Stars for about two hundred of its inner circle.  There were drinks in one of the hotel’s enormous reception rooms and then we moved through to another big room, its cavernous dark blue ceiling a twinkling of what seemed like fairy lights. The welcome came from Hyatt’s big branding boss, John Wallis, who spoke about his delight at meeting so many next-generation young travel agents, so enthusiastic and doing things differently (I was reminded about a highly out-of-the-box concept that has just opened in Austin TX, Departure Lounge, a day-long central-city coffee and wine bar that is staffed by fully-qualified travel agents, very clever). 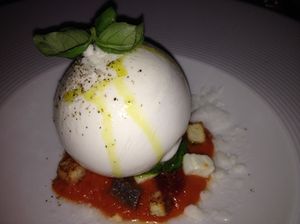 So, the efforts of these culinary stars began.  Each course was preceded by an absolutely brilliant video of the chef explaining preparations for making his dish.  First up was Andrea Aprea, chef of Restaurant Vun in Park Hyatt Milano.  He did a caprese sweet and salty, a kind bomb of lightest caprese.  Watch his video here, and try it at home.  This dish, he said, is a jigsaw of paradoxes and of course everyone at our table, who included Virtuoso’s lovely hotel honcho, Albert Herrera, and a coupe of top class travel agents, and Hyatt’s head of France, Michel Jauslin, wondered what Aprea meant by that.  Is life one jigsaw of paradoxes or is it only a caprese? The sommelière, who introduced her chosen wines with each course,  had paired this with a Castello delle Regine 2012, from Umbria. 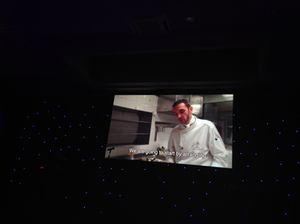 The pastry chef shows, on video, how to prepare…

And so the gala, which our table decided was actually an uber gala, continued. We had a video by Jean-François Rouquette, of Park Hyatt Paris’ Restaurant PUR, showing the preparation of scallops roasted with cocoa nibs, crystallised lemons, lime-foamed juice of coriander, turnip greens and Romanesco cabbage (with an organic chardonnay from Languedoc, Limoux Caretas 2012 Dme Franck Schisano). After eating said scallops, we had a video showing the Martinez’ own La Palme d’Or chef, Christian Sincropi, preparing figgatelli and 48-hour preserved lamb, with 2010 Dme des Terres Blanches St Rémy de Provence. 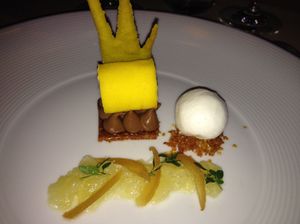 Finally, the last video, showing La Palme d’Or’s pastry chef, Julien Ochando, preparing a platter of citrus delicacies from Menton, that famous place east along the coast from here which has its own annual lemon festival – next date, February 15 to March 5th, 2014. This platter, drunk with Ch Latrezotte 2010 Dme Bernard Magrez-Sauternes, was absolutely irresistible. Oh what a pity this glorious occasion had to come to an end, but in fact it was not the end. Claudio Ceccherelli, larger-than-life GM of Grand Hyatt Cannes – Le Martinez, then leapt on to the stage to bring up all the stars, for a Grand Parade of Chefs. 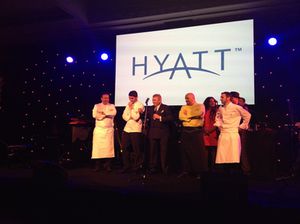 As John Wallis says, the boss of this luxury hotel is a legend in his lifetime, and he is certainly putting his stamp on Cannes’ hotel scene. Overall, Hyatt has had a great year around the world, says John Wallis – and 2014 will be even better. June 2014 sees the opening of both Park Hyatt New York and Park Hyatt Vienna, and there are a further 13 Park Hyatts in the works.  Watch this space. And with that, Claudio Ceccherelli opened the dancing.