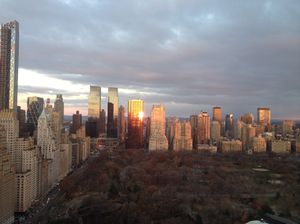 The Fall colours in New York’s Central Park are gorgeous in themselves.  Add in morning sun on buildings along Central Park South and the result is magical.  The gal had an almost spiritual feeling as she started the next stage of her day, in the Tata Suite of The Pierre, a Taj Hotel.  This is a pretty, but not completely, unique hotel, in that there are 200 bedrooms but also 76 full-service apartments, and in a very democratic way everyone shares elevators, and these elevators still have human operators.  Yes, such a waste of money but ‘the residents want them’. It makes you wonder if some of these full-time residents are so lonely that they need elevator operators to chat to. 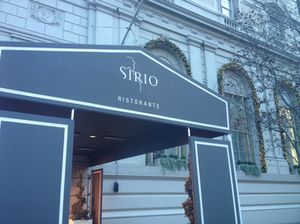 The space is also shared by Sirio Ristorante, an absolutely gorgeous chic-family-style eatery that should be just right for this exclusive neighbourhood.  There is a separate entrance leading right off Fifth Avenue.  If I lived nearby I would eat here several times a week – it would become my local, just as the Hotel Sacher’s Röte Bar is the regular dining room of many Important People who live in the vicinity of Vienna’s Opera House.  Of course THAT restaurant has been around for yonks, and its manager, Wolfgang Ebner, is a 42-year veteran.  Here, Sirio Ristorante is exactly 14 months old, so its manager, François Latapie (yes, a Parisien running an Italian restaurant in New York) has a lot of catching up to do. 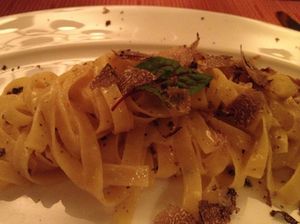 Real diners do not always want gourmet cuisine (at Röte Bar, one of the world’s ten best ‘hotel restaurants’ , the best-seller is wiener schnitzel). Here, they want, and get, an agreeable private yacht-like atmosphere, with lacquered wood and black and white Dolce Vita type wall photos by Bram Tihany, son of Adam Tihany, who designed the whole thing (Art Deco patterned carpets, and highly-lacquered tables that start square, with four leaf-flaps that can be pulled up to form them into circles). They want lovely recognise-you service, and the American version of Italian comfort food.  This, thanks to chef Massimo Bebber, who joined October this year, is what they get.  Take the home-made tagliatelle.  It is offered in two sizes, and with your choice of black or white truffle. 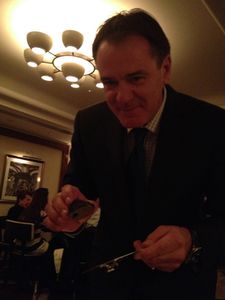 .. on to which François Latapie shaves truffles

Just right for fashionistas who do not want hidden sauces and calories that are hand in hand with celebrity chefs these days. François Latapie actually shaved the black truffles personally, obviously savouring their amazing aroma.  I put sides of spinach, and a green salad, with this.  I looked at the wine list, where the top American wine is Opus One 2009 priced at $465.

Opus One is owned by Mondavi, and Baroness Philippine de Rothschild, so in fact it is half French, but still.  I remember drinking that wine at Opus One itself, and also with Georg Rafael at Le Moulin de Mougins, but honestly, these days I would probably rather have one of Georg Rafael’s own wines, Domaine Rafael Père et Fils, which are produced in Napa by his son Mark Rafael, and winemaker Brad Kitson (it is worth reading Mark’s moving tribute to his father, one of the legends of luxury hospitality around the world). 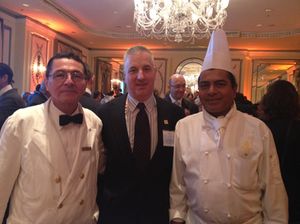 Heiko Kuenstle flanked by two colleagues during a Leading lunch

I ate brilliantly well during my short time at The Pierre (loved breakfast in Sirio Ristorante, best croissants in town..). The Leading Hotels of the World convention actually held their business events, plus the after-gala party, here. Meetings were in the ballroom, which one night had completely to be cleared for a dinner, and subsequently re-transformed for us to meet the following day.  Lunches were in a much smaller room. The two rooms are graciously separated by a lower-level rotunda, its walls and ceilings a cornucopia of trompe l’oeil and gilding. The hotel GM, Heiko Kuenstle, was, he says, ecstatically happy how everyone worked to make the entire Leading event such a success. 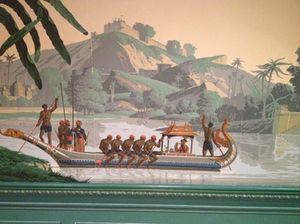 Section of the wallpaper in the gym

Especially with all that eating, a lot of working out was needed.  Regular GirlAhead readers know that, for me, a luxury hotel must have a good gym, ideally with Technogym equipment, including proper ellipticals and a Pilates ball.  It helps, of course, to have today’s newspapers and perfect bananas, apples and free water, and The Pierre’s gym has fabulous exotic wallpaper (looking at it sure beats Fox News). I almost wish I were sailing away but no, on to the next place – by plane.