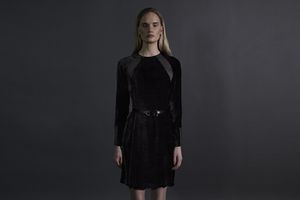 If you go down to the woods today, you are in for a big surprise…. or so the refrain more or less went, says the gal.  The woods in this case are the magnificent tree-trunk tables at Park Hyatt Zurich (they are by Korean artist Jaehyo Lee, who has also done the stunning pieces at W Seoul – Walker Hill). And what is the surprise?  Well, today, Saturday November 16th, 2013, the servers in the bar at Park Hyatt Zurich are dressed by Aziza Zina. This luxury hotel has come up with a wow yet again… as main hotel sponsor of the Mercedes-Benz Zurich Fashion Week, the hotel caters the VIP tent at the show. Back at the hotel, the main bar, ONYX, has been re-themed as a pop-up fashion bar, just for the week.  Every day servers wear a different designer. Monday was Little Black Dress, Tuesday was Asandri, Wednesday was Javier Reyes and Berenik, yesterday was Studio Laend Phuengkit. 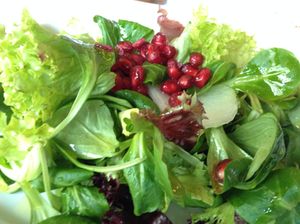 No, I had never heard of any of these designers and, unlike Seoul’s fashion scene – thinking of Seoul Fashion Week last month – it might be said that fashion and Zurich is an oxymoron.  Talking of the unexpected, ever thought of Japanese seniors and cheerleading?  This clip will brighten your day.  Back to the lovely, centre-of-town Park Hyatt Zurich.  Looking around me in the Parkhuus restaurant, I realised all the servers are about six foot and size zero, just right to slip into a Little Black Dress or whatever. I was shamed into simply ordering a salad, and jolly good it is too. The restaurant is shortly going to introduce foods chosen by nutritionalist Marianne Botta that are good for beauty and/or brains.  Since she has eight children it might be interesting to follow her ideas. 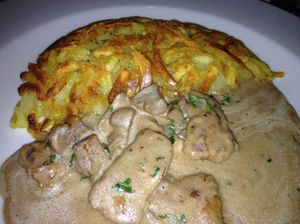 Every time in Zurich I have to have a good old veal Zurichoise – looking it up, the best version in Asia is apparently at Tables in Grand Hyatt Erawan, Bangkok. Personally I think the best I have ever had is here, at Restaurant Bärengasse.  The veal was presented in a copper skillet, and half was served, with half the rösti. The other halves were kept warm over a night-light burner. Actually rösti is so good that I can eat it by itself, just with a green salad. To make best rösti use floury potatoes, Maris Piper, Russets or Yukon Golds. To taste’em best, try a good Swiss wine, say an Arvine from Robert Taramarcaz at his Domaine des Muses, Sierre, or something organic by Marie-Thérèse Chappaz in Fully, Valais. 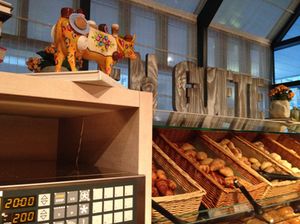 Swiss breads are some of the world’s best, and I was really impressed by breakfast in Le Muh at Swissôtel Zurich. This ground-floor restaurant opens straight into the Oerlikon square which hosts farmers’ markets – a big tourist attraction.  It, the restaurant not the square, has been redone more times than Lady Gaga’s persona, and finally its seems to have found its niche.  You go in through the bar-lounge, with a sports-bar feel, and wind around a C shape to lots of different seating areas.  There are books casually placed here, and an egg station there. 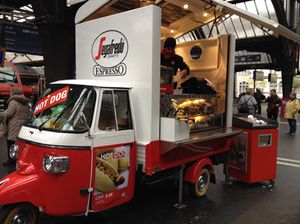 and sausage snacks at Zurich railstation

The breads, as you see above , look really enticing – and taste the same – and as well as a toaster there is a microwave if you want to warm your own. Bread also goes with sausage. The Swiss do not eat as often as the Austrians, who seem to munch something at least eight times a day to keep going. But waiting for a train at Zurich’s main station is fascinating.  There are pop-up stalls everywhere, many of them run by Candrian Catering (Martin Candrian at one time used to own the lovely Dolder Grand). But Candrian does not have a monopoly.  There are pretzel stands, and drive-by sausage stalls. Choose your sausage and it is put in an already-slit bun. 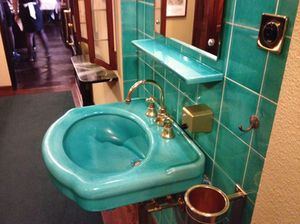 ‘Antique’ in the main exit corridor of Kronenhalle

No visit to Zurich is complete, however, without a return to Kronenhalle, which began life in 1924 when Gottlieb and Hulda Zumsteg took over the city’s Hôtel de la Couronne and turned it into the two-floor Restaurant Kronenhalle. Today it looks pretty much as it did in the Zumsteg time, with lots of heavy paneling, and walls hung with original art by such regulars as Braque, Chagall, Matisse and Miró, who paid for their meals with paintings. Today the restaurant team is headed by Andreas Wyss, and Peter Schärer is head chef. That last day in Zurich, the restaurant was full as always – I passed Urs Schwarzenbach, owner of the Dolder, on the way out. The exit, by the way, is along a narrow corridor dominated by this turquoise washbasin, yes, right in your path.  What luxury hotel would dare feature such an eyesore?