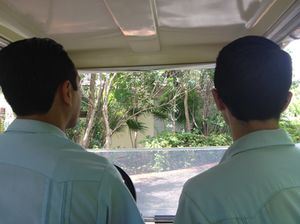 After all this time at ILTM here in Mayakoba, Riviera Maya, it was time for the gal to leave Mexico. One of the world’s best and most intelligent butlers, Ricardo Cruz from Mexico City, was outside the door of favourite suite 626 of Fairmont Mayakoba at the exact time set for leaving this friendly luxury hotel. 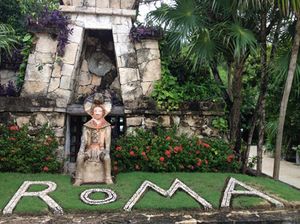 He had a buggy ready – not driven by Simon the Super-speed this time, sadly – and we set off for the main building. The SUV of Maroma was standing by, for a quick final lunch there before leaving. And ‘final lunch’ it almost turned out to be, too. 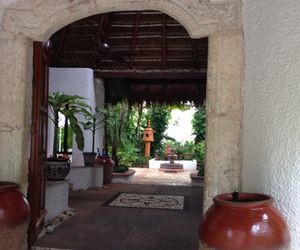 Looking through the main entrance (cigar room to the right)

Having requested no spice in my pre-ordered salad, someone had sneaked in a hot-green-chili dip which I thought was guacamole.  Now one of the, admittedly many, ways to get to my heart is via guacamole.  Oh my gosh, I took a mouthful and choked so much I thought I needed a Heimlich, which is so wrong for this lovely place. 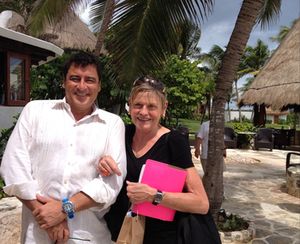 This is calmness personified.  An ancient monument greets you at the end of the half-mile drive, though dense greenery, from the busy Highway 307, the north-south artery that connects the dozens of hotels in this area. There will be yet more hotels, says Federico Echaiz Bornemann, who runs Maroma, which is uniquely Mexican.  This is why people love it. 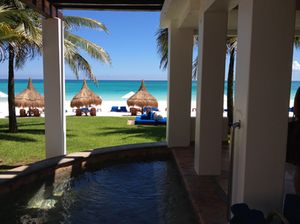 Final view back at the ocean

Russians arrived by helicopter for dinner from another hotel, they saw a Maroma suite and they immediately moved over, for seven nights. Maroma, which means head over heels, like a wave, plus Ma (mother) and Aroma (fragrance) has a beautiful beach, exclusivity and no ostentation.  Maroma-lovers know they have to go to the library to watch television – when it rains, they can also head to the billiard room, or the adjacent cigar room with humidor. Maroma is experiences.  Everyone wants to be here at turtle time, and apparently I missed, by a week, a group of friends (Filip Boyen, Georg Rafael and some others) who were here for a meeting.  One night they helped release baby turtles. Nests on the beach are zealously guarded, by Security, and when eggs hatch, if necessary the babies are taken inside to a nursery. When the turtle nanny says the time is ripe, lucky guests are invited to release the babies into the ocean. In the dark, of course.  Few other luxury hotels can provide that as an experience. I heard the story, and was rushed off to the airport…