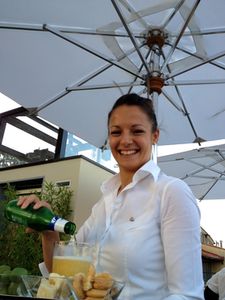 Server at the Sky Lounge, atop the Continentale

What better way to start a first evening in Florence than with a cocktail up at the Sky Lounge, atop the Continentale hotel?  Of course the gal, and many others, would like to say that all those building luxury hotels in the 21st century should put in rooftop bars but it is simply not feasible to generalise and anyway, if you had a rooftop bar on a luxury hotel in the Arctic you would never use it.  But the Continentale, which describes itself – or is described by others – as a contemporary pleasing hotel, does have this absolutely pleasing bar, six floors high.  And the server is more than pleasing.  What kind of gin?  Yes, she has Hendrick’s, and she knows it should come with cucumber and with Fever Tree tonic.  No wonder that the cognoscenti coming back to town end up here.  The people around are the entertainment crowd that you know you should recognise but you cannot quite. 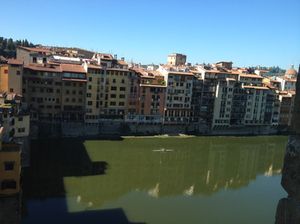 View across the Arno from the Continentale

Oh the view.  Somehow the Ferragamo family seems to own a lot of the land around the Ponte Vecchio, on both sides of the River Arno.  They have one hotel on the south bank, the Lungarno (‘along the Arno’, get it?). Here, on the north bank, the Continentale is closest to the Ponte Vecchio, one minute’s walk: take a suite here and it might be all white, with pale wood floors, a sexy ambience with lots of symbolic edge.  A couple of doors along, the Lungarno Suites will re-open May 2014 as Portrait Suites, with lots of grey paint and black and white etceteras on the lines of futuristic but Art Deco phones, and hints of celebrities. There is another hotel that people rarely talk about.  Anyway, before finishing the Hendrick’s I look down, across the Arno. A lone rower somehow manages to miss the bridge as he heads for home. 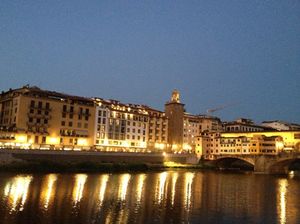 View back across the Arno (Ponte Vecchio to the right)

And then we walk back across the bridge, through the tourists who are still here, end of summer and end of day. There are masses of Americans, and also many Italians, holidaying at home rather than taking their usual charter flight with lots of noise and nonstop smoking on arrival, to Sri Lanka or The Gambia or wherever.  Every woman under 30 is wearing the shortest shorts imaginable, which is tough on those with bad legs.  At the Lungarno, where I am staying, we head straight for its restaurant, Borgo San Jacopo, after the narrow cobbled street outside.  From the street you go in past walls of bottles filled with olive oils (not quite the same, note, as ‘bottles of olive oil’) to the premium table, one of four on the end terrace over the water.  We watch the Ponte Vecchio as it gets dark, and look to the river’s north bank. 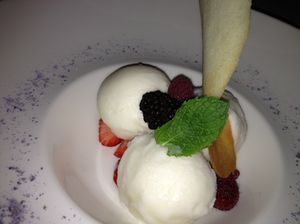 Dessert, to end the meal….

The chef, Beatrice Segoni, is obviously female, as are all the servers, though the sommelier is a guy.  This is the third best restaurant in town, we are told.  The menu lists the ‘orchestra’, led by the chef, with all the main players mentioned. Salvatore Biscotti – what a lovely name – chooses wine, a Merlot Podere della Civettaja 2010, and I go for what I think might be fish and chips, namely a Mediterranean-crusted henfish, with crisps.  These are, of course, what the Brits call crisps, curved paper-thin wafers, and an eggplant sauce replaces British mushy peas. 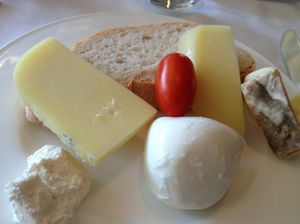 Tuscan breakfast, at the Lungarno

I want to prolong the view, looking out over the Arno, so I finish with a lemon sorbet, and then head for bed.  Girlahead tip, for the most amazing view, almost as if you are in the presidential, or owner’s, suite on a topnotch cruise ship, book room 109 here.  It is one deep room – come in to the living area, go through pulled-back curtains to dining, and the bed.  Wake up, turn to your right and look through your French windows right at the Arno.  I almost think the whole thing is going to sway gently, as if on a ship, any moment.  Of course I am up with the lark.. 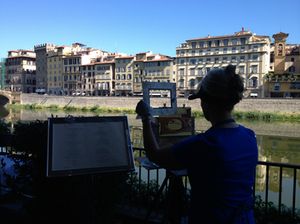 In solitude, a painter remembers her Arno scene

As the sun rises, I join other runners doing a circuit, two bridges down.  From the Lungarno, turn left and left over Ponte Vecchio, left along Lungarno Acciaioli, past Ponte Santa Trinita and along Lungarno Corsini, left over Ponte alla Carraia, left along Lungarno Guicciardini, and continue along Borgo San Jacopo.  I am thinking of a Tuscan breakfast.  The hotel offers a Lungarno omelette, with slightly salted Tuscan ham and rosemary-scented goat cheese but I go for simple Tuscan fare from the buffet, namely the low-salt plain white bread that the locals here love – they do not seem to have heard of wholegrain – and ricotta and other cheese and a perfect tomato. As I leave the luxury of a hotel that is right on the Arno, another guest is painting the view.  There is so much art already in the hotel, by the way.  Thanks to the Ferragamo family, there are over 480 pieces, including a Picasso drawing and three by Jean Cocteau.  But Florence is one big artwork, and it is time to explore…