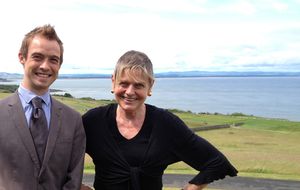 Angus Watson is an extraordinary young man.  On June 21st, 2013, he escaped from his day-job at another of Scotland’s friendly golf hotels, Fairmont St Andrews, to join his colleague Graeme Dawson, plus Gary Davidson and Alastair Love, in setting the new world record for the fastest ever four-ball round (61 minutes and 15 seconds, on the Old Course), plus playing 189 different holes in one day. They exceeded their stated goal of raising £6,000 for three charities, Cancer Research UK, HCPT Group 77 – The Pilgrimage Trust (taking disadvantaged kids to Lourdes) and The Scottish Disability Golf Partnership.  And, says the gal, they showed stamina. 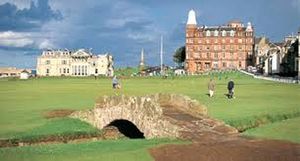 The day kicked off at 3.15 (in the morning).  In turn they played Kingsbarns Golf Links, The Balgove, The Old Course, The Eden, The Strathtyrum, The Dukes, The Torrance, The Kittocks, The Castle, The Jubilee and The New, a total of 189 holes, and they played-em all.  The Old Course was deliberately planned to start at 6.25am, to beat the crowds.  As all golfers know, normal players can only enter the ballot to play 48 hours ahead, which means cross-fingers and hold-your-breath. You can also apply on the first Wednesday of September – which, this year, is September 4th, 2013 – to get tickets for next year. 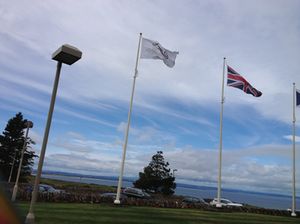 Flags flutter over the healthy, windswept approach to the resort, which was opened in 2001 by Dr Don Panoz, whose invention of anti-smoking nicotine plasters made him enough of a fortune to be able to invest here, and at Ch. Elan Resort in Georgia, and Ch. Elan Sebring International Raceway in Florida. He has a winery somewhere, and a Formula One speedway somewhere-there.  Here, he sold on, and the 209-room resort belongs to Apollo. 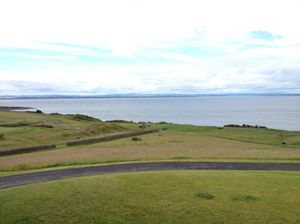 Looking over one of the courses…

What started out as St Andrew’s Bay became Fairmont in 2006, which means that anyone staying in London at The Savoy, which is also a Fairmont, could combine a lovely weekend or other break.  Five hours by train from London Kings Cross to Leuchars, where you are only 15 minutes from St Andrews, on Scotland’s east coast an hour east of the Forth Bridge. Leuchars also has landing for private jets. 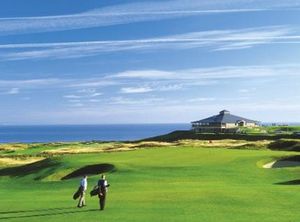 … and playing a round

There are two 18-hole golf courses here. The Torrance has a striking infinity green at its 16th hole (it is named for Sam Torrance).  The Kittocks, named for the deep gullies in the cliff, is designed by Bruce Devlin and Gene Sarazen and its best-known hole is the 17th.   Most players bring their own clubs, I am told, other than Asians who rent.   When the team finishes, they can head for the signature 17th hole to watch others still on the course. 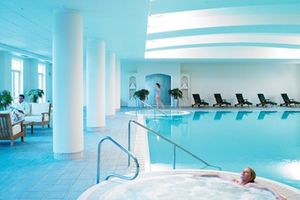 Weary golfers can also head for the luxury hotel’s spa, where the best seller is a ‘Sam Torrance massage’ taking in neck, shoulders, hands and feet.  Now that sounds good, even if one has not matched anything like the ardour of Angus Watson And Friends.