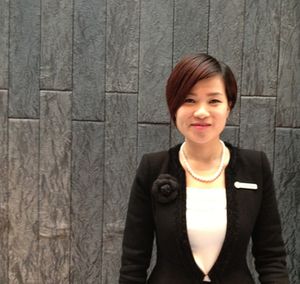 Fashion and hotels are becoming more and more interlinked. Some designers put their names to hotels, with Armani and Versace, and possibly Missoni, leading the success stories when it comes to wear-gear, and Bulgari in the jewellery sector. The gal is day-dreaming, as she rides at 300km per hour, by train. What would a Vivienne Westwood hotel look like? Ghastly. A Tom Ford luxury hotel would have kids’ toiletries, a gesture to his own son. A Chanel hotel could be divine. And what with new fashion brands coming up the whole time there is plenty of room for scope. First Lady of China, Peng Liyuan, for instance, wore Ma Ke designs (Exception de Mixmind and Wuyong brands) on her trip to the USA – finally there is a currently first lady to compete with  Valérie Trierweiler when it comes to style. 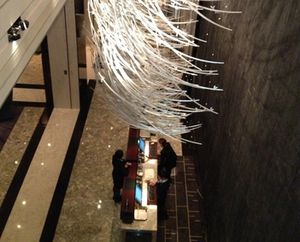 Look down at front desk

A Chanel hotel might even look halfway like the six-month old Four Seasons  Hotel Shanghai at Pudong, where the front desk ladies look so exquisite you want a photo. In June 2012, yes before it was open, the 55 curving stone steps up from the lobby to the next floor became a catwalk for a getting-to-know-you party. The girls, and some of the guys, managed to process up and down without tripping, showing off the Chanel-type outfits that are actually work uniform (they are designed by Masaru Mineo). Today, as I take the steps up to look at the Chinese restaurant on that second floor, I glance back down, to a chandelier that hangs over the reception desk, and to Hirotoshi Sawada paintings. 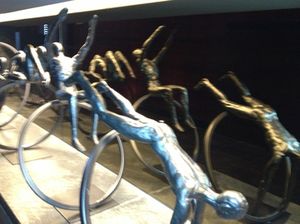 Someone has done a brilliantly witty job in selecting artworks for this hotel. Walk along to the gym and an inset ridge along one of the corridor’s walls has a back-lit triathlon of 12-inch high figures, hanging through hoops, cycling, turning inside out and back again. These were all made in Bali by Jeffrey Lee.  It is always inspirational to have photos on the wall that encourage you to work out even harder, even faster (love the decorations in the eyrie gym of the Hotel Bristol, Vienna), but somehow having actual sculptures has even more effect. 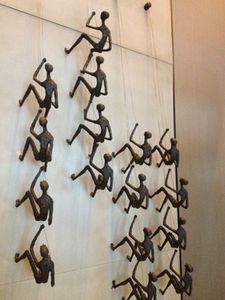 And look at the figures in the gym itself.  Here more Lees are set on one wall.  Four groups, each of four, appear to be climbing up as a team.  One group is far ahead, trying to go faster. This is unique and deserves a prize.  It is actually quite difficult to think which gyms would warrant awards for anything other than equipment – perhaps Mandarin Oriental Jakarta, for setting all main pieces of equipment in a circle, facing inwards.  But have you noticed how unfit those who organise awards, both in newsletters and at ceremonies, must be as they reward spas but never gyms?  The only exception here is any publication to do with Nancy Novogrod, who until it closed for renovation used the gym at the Loews Regency when she was in New York. 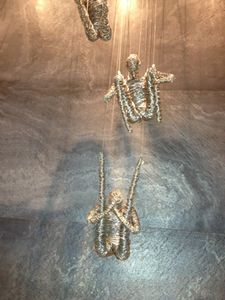 Now, she tells me, she has to go to an Equinox, and when Loews Regency re-opens the gym will only be for hotel guests (shame on you Jonathan Tisch for turning the Editor-in-Chief of Travel+Leisure’s publications away, not a good idea).  Anyway, back here to this sensible Shanghai hotel, which has its lobby on ground floor, and only one elevator block, up to whichever floor you want.  Say the pool. Oh YES, once past the gym you come to this big indoor pool, with an LED screen at one end which shows, ceiling-high, flames evolving into woodland flowers and then to rocks. 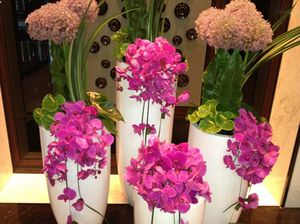 Flowers in the lobby

I am going to the spa, next to the pool, where I am greeted by more young  ladies in ‘Chanel’ and pearls, with lots of orchids around. After my blissful hour, during which I sleep like a baby, I head downstairs, for yet more beauty, in the form of flowers in the lobby of this luxury hotel.