Nadja Swarovski is a gal’s gal (apart from the fact that her refrigerator/icebox always has ‘pomegranate juice, eggs, cheese and vegetables’ whereas the gal’s has Total – Greek – yoghurt, fresh blueberries, mango, raspberries and strawberries and, once a week when home, a bottle of Champagne).

Nadja likes Sisley for smell, in the form of Eau de Sisley 2. When in the USA, her hair is done by Frédéric Fekkai, whose products I was first introduced to when Victor Clavell, opening GM of The Ritz-Carlton on New York’s Central Park South, brought in his lovely toiletries.  She likes Ladurée macaroons and San Ysidro Ranch in Santa Barbara CA.

This luxury 40-cottage resort is owned by Beanie Baby king, Ty Warner (it is run by Rosewood, who also manage his Las Ventanas al Paraiso in Los Cabos).   Once a 27-acre working citrus orchard, in 1893 it was for some reason turned into a holiday home for the King of Spain, and later Laurence Olivier and Vivien Leigh got married here, and JFK and Jacqueline Bouvier Kennedy chose it for their honeymoon.  I visited 17 August 2005, just before it re-opened  I must go back….

This book comes out February 2012

An Asian proverb says it is better to see something once than to hear about it a thousand times.  New York-based travel writer Patricia Schultz has made a clever name for herself with her book 1,000 Places To See Before You Die, which has been translated into 25 languages, sold over three million copies and spawned such brand extensions as 1,000 Places To See in the United States and Canada Before You Die.

The latest edition, The New 1,000 Places To See Before You Die, is published February 2012. Looking at its excellent website, I wonder why Yoho National Park in Alberta is labelled Parks, and why West Lake is labelled Zhejiang when anyone who has ever been there calls it West Lake Hangzhou (which is, admittedly the capital of Zhejiang Province).

In fact time, perhaps, for a bit of egocentricity.  Follow girlahead regularly and you, dear reader, will be able to compile your own 1,000 places to visit while you are still alive.

For instance… The boundary of Yoho National Park is only ten minutes from Alberta’s Lake Louise and there you have one of Canada’s iconic luxury hotels, Fairmont Chateau Lake Louise, built by railway magnate Cornelius Van Horne in 1890.

Wake up in the morning looking out over the lake, and know you can have a day of mountain biking, fly fishing, riding, skiing or climbing (this is the headquarters of Canada’s first mountain rescue facility, Canadian Pacific’s Swiss Guides).  You feel good staying here.  It is, in typical Fairmont style, as green as possible: about 40 percent of the property’s electricity needs are met by a blend of wind and run-of-river electricity generation. 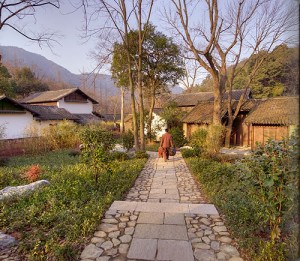 Hangzhou, next to West Lake, was said by Marco Polo to be the finest and most splendid city in the world.  Today the freshwater lake (Xi Hu in Chinese) encompasses 1,500 acres. Literally thousands come every weekend and holiday from Shanghai, 70 minutes by high-speed train, to walk or cycle around its 12-mile perimeter, or boat on the water.

The most unusual hotel in the area is undoubtedly Amanfayun, the brilliantly converted old village of Fayun, 20 minutes from Hangzhou. The sloping, cobblestone main village street remains, as a pedestrian walkway through the still-working tea terraces.  Dotted into the landscape are the original village houses, now forming a 42-cottage resort.

Villa nine, for instance, up 30 steps from the road, has underfloor heating below the cement-slab floor, and whitewash walls rise to a cathedral ceiling.  I loved the instant free WiFi, and the two-person shower, and opening my door straight into ‘my’ tea-bush terrace. Other cottages have been leased to local restaurateurs, including a brilliant Vegetarian Restaurant, run by local Buddhist monks.

Anyway, if you cannot wait for everything Girlahead is going to share, you can read Ms Schultz updated as of February 2012.  I recommend, by the way, Richard Cavendish’s 1001 Historic Sites You Must See Before You Die.  A collaboration with UNESCO, it is informative and polysyllabic on such sites as Libya’s Leptis Magna, plundered by the French consul around 1700 (OMG what would President Sarkozy say to that?).  When there is a chance to return, I will be back – I last stayed at Corinthia Bab Africa, Tripoli, 19 May 2007, in room 1180.

Meanwhile, every day brings something beautiful in nature just to make one feel delight in being alive. See the colours along hedgerows in southern England this morning.