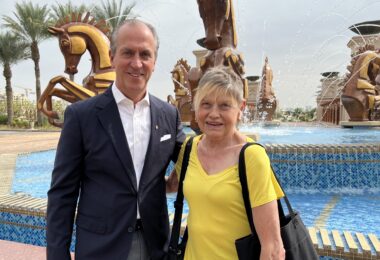 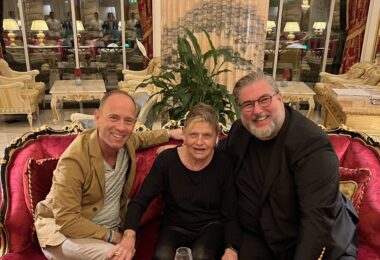 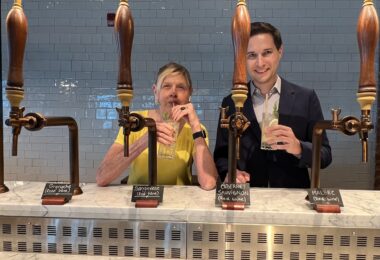 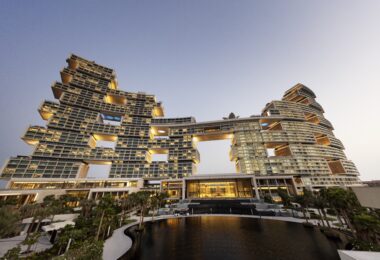 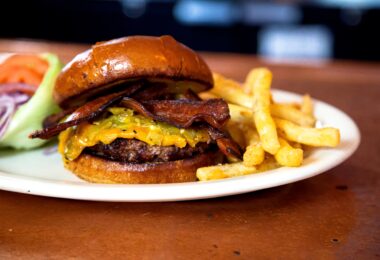 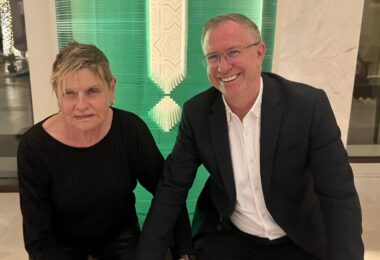 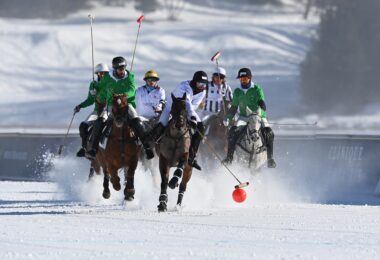 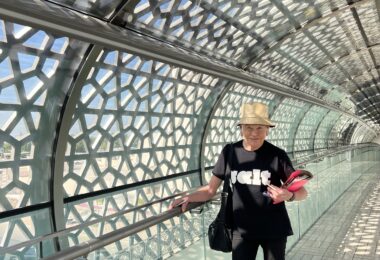 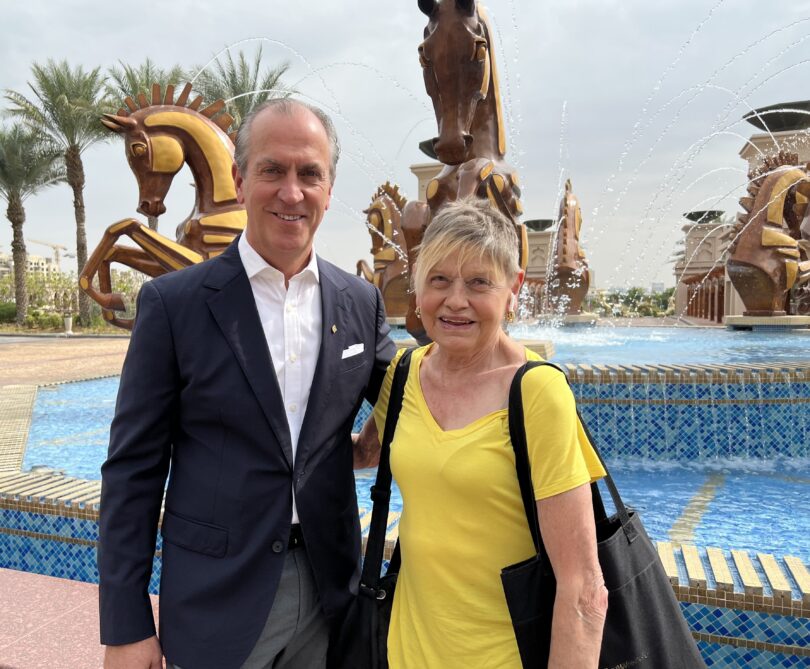 Peter Roth, RVP Jumeirah and big boss of the company’s signature MADINAT JUMEIRAH complex in Dubai, can be summed up in one word, ‘debonair’.    What a lovely word that is, from the phrase de bon aire (interestingly French sticklers complain about Parisians talking about ‘picnics’ and ‘weekends’ but the Anglos pinched those French words back in the 13th century).

Debonair also implies a degree of charm, polish and carefree outlook. James Bond can be called debonair. Girlahead has no idea how many real spies can be thus classified – she’s only come across two, or so she thinks, and the one coming out of the Pacific with a chilled bottle of Veuve Clicquot was enigmatic and the one wearing trilby to ward off the English cold was boring as a party political broadcast.

Peter Roth performs Bond-like trills. Some of the golf carts here have Escher-like camel decorations by Sheikha Wafa Bint hasher Al Maktoum, working as FN Design (she’s a cousin of Sheikh Mohammed). The boss has his driving licence in hands. He drives to PierChic, Madinat Jumeirah’s over-water restaurant 300 metres from dry land.  There’s a curlique halfway along its boardwalk, an enclave to one side, ideal for an early evening cocktail to watch the sun set behind Burj Al Arab, about a metre away as the crow flies over the water.

Pierchic is empty save for smiling staff.  It’s truffle time, and everyone’s favourite Italian mamma Beatrice Segoni, comes out personally to grate the white truffle, and grate some more, over the tagliolini. Girlahead imagines she is M, for Momma – Bond’s M was apparently based on Churchill’s spymaster Sir Stewart Grenville Menzies with whom Ian Fleming interacted at London’s Old War Office (yes, that’s right, the one that soon opens as RAFFLES OWO LONDON). This M’s smiling, and so is Girlahead, and so is Peter Roth. The restaurant is now full. Lunch for Emirati Bright Young Things. Just the kind of event-magnet that Peter Roth encourages word of mouth to bring yet more business.

Perhaps debonair’s other connotations, of charm, polish, and worldliness, should be combined with business acumen?  The hotel industry is full of surprises. 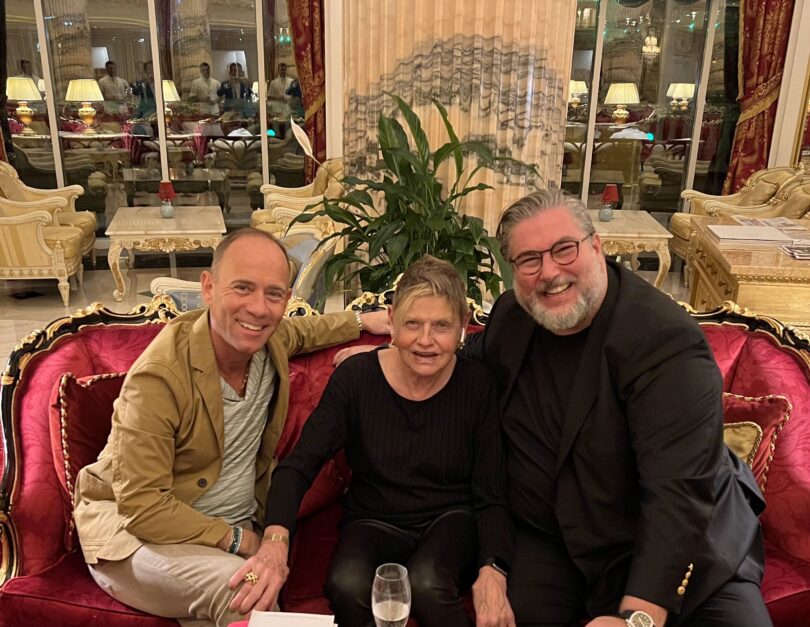 Photographed at RAFFLES THE PALM DUBAI, Accor’s Mark Willis, left, and Yigit Sezgin typify new-look hoteliers. Their creative enthusiasm feeds off the proximity of one to the other. Mark Willis is CEO of Fairmont, globally. Yigit Sezgin heads branding for Fairmont, worldwide. Both are based in Dubai which shows two things.  As Girlahead has said so often, Dubai is increasingly becoming the centre of the world, and in the case of this personable pair, lots of creative thoughts are on the table.

Yigit Sezgin has just been in Los Angeles – the Grammies could not take place without this terrific Turk. He went on to London, to boost Universal Studios at THE SAVOY, a Fairmont Hotel. 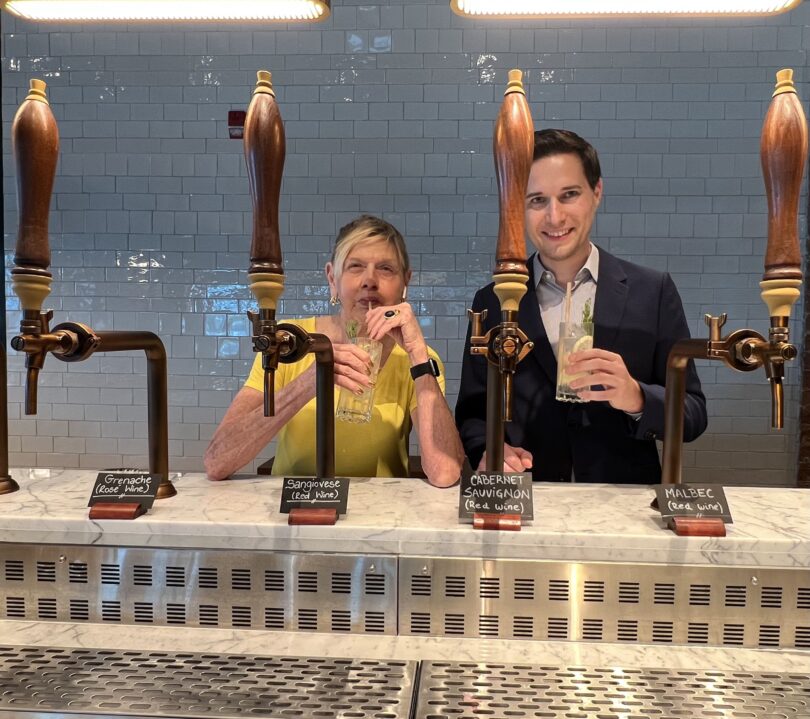 Anything that is different stands out. Go along a row of Victorian-era terraced houses in a particular sleepy town in England and nearly all the two-floor houses are the same. From the front, one anonymous-coloured door and one window at ground floor. Upstairs, two windows. The difference is that one of the houses has a bright scarlet door. It stands out. (It’s owned by a Ukrainian blonde, three former husbands and exuberance that would make Dolly Parton appear as a sleepy snail.)

To hotels. Girlahead admits she was not prepared to be bowled over by MARRIOTT RESORT THE PALM JUMEIRAH DUBAI. It’s a massive glass house, 14 floors high, with 608 rooms inside. All rooms, from 41sq m up, face the ocean. This means that there are long internal corridors -184m-long straight corridor from one end to another, with 84m-long side corridors. Best rooms are two rooftop Penthouses, with big terraces, and four, 87sq m Palm Suites.  All rooms, anyway are simple effective, white with hints of blue.

Right, what IS different? The ground floor has lots of eating and drinking opportunities. Girlahead loved the pasta studio, with rows of spaghetti lengths literally hung up to dry. And in the adjacent brasseries there’s wine on tap. See above.

One final memory. Can’t remember what his outgoing Aussie Sales supervisor was wearing but the enthusiastic Westphalian GM Gerhard Schmitt, tieless of course, was wearing sneakers. Marriott today, updated, the difference and we love it.