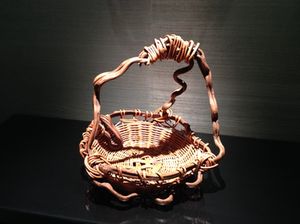 It is rare for any design to last 20 years without noticeable change – the gal thinks of her Ferragamo court shoes, and the Burberry raincoat she once wore religiously, day in, day out.  Luxury hotels are no different. Most date and look their age unless they have the complete make-over that the Bel-Air did in Los Angeles, or that The Lanesborough is experiencing now, in London. One exception that is still as young as it ever was is the trendsetting Park Hyatt Tokyo, which opened 1994 at the south end of Shinjuku Park. Designer John Morford’s brilliance in putting in such unique artifacts as one-off baskets, beautifully illuminated, by elevators on each of the bedroom floors still look as striking today as they did then, says the gal.

Simplicity and detail are his buzzwords, carried out by everyone in the hotel. See this plate of Nagasaki strawberries, simply beautiful. The bedrooms flow, with soft eau-de-nil and stone colourings, and lots of wood, and living greenery. Suite 4232, for instance, has a wall of ceiling-high wood panels, set in zigzag formation: the wood is rare lake-submerged elm from Hokkaido. To the rear of this wall is a walkway, going from bathroom to living area (both of which can be reached directly from the bedroom), via the suite’s entrance. It is tempting to walk round and round, noticing, say, the selection of CDs, including Andrea Bocelli.

As I make the circuit, I admire yet again a floor-standing lamp, its white paper origami shade reflected in the adjacent wall. I have books, chosen like every detail by John Morford, that include a somewhat erotic selection of adult Japanese fairytales, and a Sumo-weight English-Japanese dictionary. First time I came to this magical city I needed a small pocket dictionary but now road and subway signs are bilingual, and English usage is a hundred times more common – ILTM Japan, last week, in Kyoto, was entirely in English. I came across one young man with faultless English, New Zealand style; he had been bellboying in Christchurch at the time of its tragic earthquake.

Park Hyatt Tokyo’s lobby is on the 41st floor.  Rise up in elevators that have whimsical animal-human sculpted heads on cabin walls. Elevator lighting intensifies as you climb. Emerge to a light-filled stone and glass dome, with a living garden in its centre.  Walk past modern-looking restaurants, unchanged over two decades, and through a library of intelligent art, culture and travel books, to an area where you can sit and discuss. Culture is paramount this year. 20th birthday celebrations not only include special-label Roederer but, on July 30th, 2014, the first performance, here in the hotel, of Timeless Passion, commissioned from versatile musician Ryuichi Sakamoto, known to some for his sound track of The Last Emperor, and his starring role in the 1983 movie, Merry Christmas Mr Lawrence, also featuring David Bowie and Tom Conti.

Philippe Roux-Dessarps and the Girandole frieze

Philippe Roux-Dessarps, GM of this hotel – currently TripAdvisor’s best in town – has an extremely busy year, finishing an MBA in Singapore, competing in yet more triathlons and hosting the hotel’s birthday events.  He stands here by Girandole, an all-day brasserie that has a photo montage on its upper walls, showing 144 black and whites of café scenes, by Berlin-born photographer Vera Mercer, who also displays at the Plateau level of Grand Hyatt Hong Kong. The café scenes are timeless rather than retro, just like the hotel’s other main restaurants, Kozue, and the 52nd floor New York Grill, with its magnificent view and bold paintings, by Spaniard Valerio Adami, of Carnegie Hall, the New York Yankees, Radio City Music Hall and the Rockefeller Center. 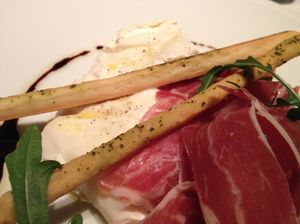 New York Grill has a new chef since my last visit, Argentinian Federico Heizman, who of course knows how to cook beef. Tonight, I start with fresh burrata, Iberico ham, Kochi tomatoes and thyme-flavoured grissini, and then go on to local beef – well, that is an understatement. The 190-gram Yonezawa sirloin, from Yamagata Prefecture, is so tender I can cut it with a spoon, says restaurant manager Roman Kardashov (it is one of Japan’s beef triumvirate, together with Kobe and Matsusaka).  Talking of threes, what fun trios of girls, mum and daughters or whatever, must have at this luxury hotel.  Its Friends at The Park 24-hour package includes a bedroom, Champagne (20-year special?), in-room snacks and unlimited use of the pool and fitness up in a soaring 45th-floor atrium.